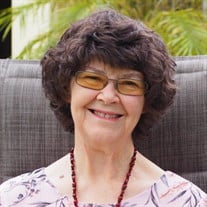 Lorna Elaine Wilson, age 78, of St Augustine, Florida, went to be with the Lord on March 2, 2022 after a brief stay at Baptist South Hospice. Lorna was born to Alfred and Gwen (Dallaston) Tomlinson on March 19, 1943 in Wellington, New Zealand and grew up in Plimmerton, New Zealand. While attending dental nursing school, Elaine attended a Youth for Christ retreat and met her husband-to-be, David Wilson, who was an airline pilot at the time. After one year of courtship, Elaine and David married in 1963. David continued to work as an airline pilot for 4 years until they answered the Lord’s call to become missionaries together. They moved to Columbia, S.C. to attend Columbia Bible College (now Columbia International University) with David graduating in 1970. Elaine and David started their mission career in the same year, and were sent to the inner city of Baltimore and Washington, D.C. In 1979 they went to India on a sabbatical and worked in church planting and evangelism. During their ministry years they lived in Baltimore, MD, South River, New Jersey, Stuart, FL., Atlanta, GA., and most recently moved to St. Augustine 2011. Elaine supported the ministry and raised a family of three sons at home while David traveled and established branches of an evangelistic ministry with national evangelists in 12 developing countries. She always had a ministry and was a public speaker in Christian Women’s Clubs, etc. She also taught the Bible in Good News Clubs for children, and began teaching mainly 4-year-olds in Church Preschools in 1989. In 2011 she became a beloved pre-school teacher at Anastasia Baptist Academy and has remained there until December 2021. She was a member of Anastasia Baptist Church, and sang in the choir. Elaine was totally dedicated to her Lord, her calling to missions and her family. She was kind, loving, empathetic and will be deeply missed. She is survived by her husband after 59 years or marriage, David Wilson of St. Augustine; sons Stephen Wilson and his wife Gloria of Oregon, Mark Wilson and James Wilson, both of St. Augustine; and grandchildren, Kenny and Sarah Wilson. A memorial service will be held at 11 am on Saturday, March 12, 2022 at Anastasia Baptist Church with Pastor Walter West officiating. St. Johns Family Funeral Home is in charge of arrangements.

Lorna Elaine Wilson, age 78, of St Augustine, Florida, went to be with the Lord on March 2, 2022 after a brief stay at Baptist South Hospice. Lorna was born to Alfred and Gwen (Dallaston) Tomlinson on March 19, 1943 in Wellington, New Zealand... View Obituary & Service Information

The family of Lorna Elaine Wilson created this Life Tributes page to make it easy to share your memories.

Send flowers to the Wilson family.