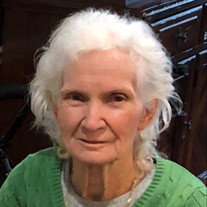 Linda Register Silber, age 78, of Gainesville, Florida, passed away June 28, 2021 at Dr. Raymond Fitzpatrick Haven Hospice in Gainesville. Born on August 14, 1942 to O.A. and Gussye Register in LaCrosse, Florida. Linda was a 1960 graduate of Santa Fe High School where she was a cheerleader and played on the basketball team. During her freshman year at Santa Fe, Linda met her husband-to-be, Jack “Herb” Silber. After graduating high school they were engaged while both of them were working in the aerospace industry. They married on September 20, 1964 at Antioch Baptist Church in LaCrosse, Florida. Herb and Linda began their married life in Merritt Island, Florida. They bought their first home in Titusville in 1965, which is where they resided and raised their family. In 1998, they began splitting their time between Oak Hill and Gainesville homes. After high school, she began her career at McDonnell Douglas in 1964, as an Executive Secretary to the Vice President. She later began working in Finance and Accounting on the Payloads Ground Operations Contract (PGOC), until retiring in 2003, with 39 successful years. Linda enjoyed her work so much that after retiring from McDonnell Douglas, she continued working in a similar capacity for Indyne Corporation under the Joint Base Operations Contract (J-BOSC) until her retirement in 2012, with 47 years of dedicated service supporting NASA and our nation’s Space Program. Linda was truly selfless and tireless. Her life revolved around her family. A consummate homemaker, she loved taking care of the needs of her husband, daughters and grandchildren. She loved cooking, baking, and working in the yard. She was a sports fanatic and enjoyed football, basketball and NASCAR. Linda and Herb were longtime Florida Gator Football season ticket holders and enjoyed traveling extensively. She will be deeply missed. Linda was preceded in death by Herb in January of this year, a sister, Arie Swartz, and a brother, Buddy Register. She is survived by daughters, Lisa Silber Hoffman (Dana) of Dallas, GA, Jacqueline Silber Nemeth (Brian) of Gainesville, Fl, grandchildren, Aaron Hoffman (Kirsten) of Marietta, GA, Lindsay Hoffman of Atlanta, GA, Drew Nemeth, Alex Nemeth, and Landon Nemeth, all of Gainesville, FL.; and great granddaughters, Ada Grace Hoffman and Nora James Hoffman, of Marietta, Ga and her sister, Regina Parker, of Green Cove Springs, Fl, as well as, many nieces and nephews. A celebration of Linda’s life, as well as Herb’s, will be held at 2 pm on Sunday, July 11, 2021 at St. Johns Family Funeral Home, 385 State Road 207, St. Augustine, FL, 32084. A visitation of family and friends, beginning at 1 pm will precede the service. Those unable to attend can view the service live streamed at https://iframe.dacast.com/b/156599/c/549019 . St. Johns Family Funeral Home in St. Augustine is in charge of arrangements.

The family of Linda Register Silber created this Life Tributes page to make it easy to share your memories.

Send flowers to the Silber family.