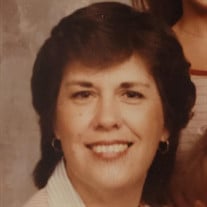 Linda Marie Kouremetis, 79, of St. Augustine, Florida, passed unexpectedly on July 22, 2021. She was born and raised in St. Augustine to the late, Joseph and Carrie Hunter. She is survived by her husband of 40 years, Constantino “Gus” Kouremetis; children, Shelley Waldron (John), Randy Beal (Gina), Marcia Bishop (Joe), Gary Beal (Beverly McMahan), Debra Franczak, Jessica Bradley, Kaitlyn Kouremetis and Taylor Kouremetis (Eli Steedley). Linda’s siblings are, Carolyn Robshaw, Jean Carcaba, Patricia Hoey (James), Diane Solana (Jimmy) and Jody Hunter (Angela). Linda has been blessed with 22 grandchildren, 20 great grandchildren and numerous nieces and nephews. Linda was preceded in death by a grandson, James Gupton. Linda was a 1960 graduate of St. Augustine High School, where she was a DCT student who worked at the St Johns County School Board. Upon graduation Linda began her career with the school system, leaving St. Augustine in 1981 as a Title 1 Executive Secretary. Moving to Tampa, Florida for her husband’s Masters program at the University of South Florida, Linda held the position of Executive Assistant for Grinnell Fire and Life Protections Company. Linda moved to Columbus, Ohio when her husband held a position at the Ohio State University. She was Executive Assistant to the Production Vice-President of the Murfin Company Upon her return to Florida, Linda was the Utility Customer Service Director for the City of Tarpon Springs (1983-1993). From 1994 until her retirement in 2007, Linda served as Executive Assistant to First Coast Realty/Homes of Deltona. Linda, who was of Menorcan heritage, was raised a Roman Catholic and was confirmed into the Greek Orthodox faith in Columbus, Ohio. She contributed to Greek church activities in Columbus, Tarpon Springs and St. Augustine. When residing in the St. Augustine Shores, Linda served on a variety of boards to improve the community. An avid sports fan, Linda enjoyed following ALL University of Florida sports, NFL Football with a strong affection for the Pittsburg Steelers. She had a special love for children, “Yiayia” always focused on her entire family. The family will hold a private memorial service at a later date. St. Johns Family Funeral Home and Crematory is in charge of the arrangements.

Linda Marie Kouremetis, 79, of St. Augustine, Florida, passed unexpectedly on July 22, 2021. She was born and raised in St. Augustine to the late, Joseph and Carrie Hunter. She is survived by her husband of 40 years, Constantino &#8220;Gus&#8221;... View Obituary & Service Information

The family of Linda Marie Kouremetis created this Life Tributes page to make it easy to share your memories.

Send flowers to the Kouremetis family.