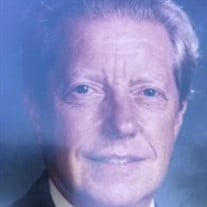 Bill Motzel passed away peacefully on August 1, 2021 Throughout his 50 years in Ormond Beach, Bill was actively involved in numerous community and church service organizations. From earning the Community Citizenship Award At ERAU to serving on the Pastoral Council for the Diocese of Orlando and the Ormond Beach Planning Board, his concern for helping others was genuine and seemingly limitless. Some of his favorite “projects” were Family Renew, a homeless shelter in Holly Hill, where he volunteered extensively in various capacities. He also served as President of Habitat for Humanity. Being involved in Habitat led to a prison ministry at the Tomoka Correctional Facility. Bill was committed to helping those in prison. He brought the word of God into the prison, helping the incarcerated to learn job skills that would help them to live productive lives once released. He was a United States Air Force veteran, worked for General Electric on the Apollo Space program, and served as Vice President of Embry Riddle Aeronautical University His example of living a life of service had a profound effect on many people. He will be missed. A Mass of Christian Burial will be held on Monday, August 16 at 11:00 am at St. Brendan’s Catholic Church, 1000 Ocean Shore Blvd, Ormond Beach. There will be a gathering of family and friends before the Mass starting at 10am. Survivors include his wife, Judy, his seven children: Laura, Kathy, Steve, Larry, Kristen, Rick, and Rob. The family kindly requests that masks be worn at the gathering and Mass. In lieu of flowers, the family asks that donations be made to: Horizon Communities in Prisons, 1700 N. MONROE ST. SUITE 11-185 TALLAHASSEE, FL. 32303 386.689.8240 https://www.horizoncommunities.org/foundation to donate securely online.

Bill Motzel passed away peacefully on August 1, 2021 Throughout his 50 years in Ormond Beach, Bill was actively involved in numerous community and church service organizations. From earning the Community Citizenship Award At ERAU to serving... View Obituary & Service Information

The family of Leon William "Bill" Motzel created this Life Tributes page to make it easy to share your memories.