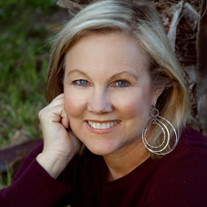 Kristine Louise Phillips passed from this world to the next on August 12, 2021 after a long illness. She leaves behind her bereft family; parents, Richard and Joyce Phillips, children Corey and Aubrey Geddings, sisters Marta Phillips and Holly Kranzmann, business partner and honorary brother Matt Kraycinovich, grandson Jack Wade, nieces Madeleine Phillips, and Alyssa and Sydney Kranzmann and uncle, aunt and cousin James, Beverly and Kelly Littlepage. She was predeceased by her grandparents Alfred and Ellen Phillips, and Harold and Gwendolyn Littlepage, and infant sister Kara Phillips. Kris was born in Chicago, Illinois on September 17, 1959. She graduated from Butler University in 1981 and earned a Broadcasting Certificate from the Broadcast Center in St. Louis in 1982. Kris began her career as an on-air television reporter for the number one station in Little Rock, KATV, the ABC affiliate. As senior reporter she specialized in covering politics and high-profile court cases. She also became a meteorologist, earning her AMS designation while a weekend weathercaster. Kris produced several documentaries for Arkansas Public Television, and moderated Arkansas Week, a statewide public affairs program on legislature and statewide political issues. Kris moved to Washington, DC and served as Communications Director of a US Senate Committee under US Senator David Pryor, coordinating a national media outreach effort on pharmaceutical drug pricing. Kris then co-founded and served as Managing Partner of Geddings & Phillips Communications, a public affairs and political advertising agency co-owned with her former husband Kevin Geddings with offices in Washington, DC and the Carolinas. She won several national awards for television and radio ad production. Kris was the host of Secure Retirement, a nationally syndicated radio show focusing on senior issues, for more than 5 years. Kris hired Matt as an intern in 2000, starting what would become a lifelong friendship and later, business partnership. Kris resettled in St. Augustine, Florida in 2008, and ran her own business, Phillips Broadcasting, which operated Newstalk WFOY AM 1240 & 102.1 FM and WAOC AM 1420 & 96.5 FM. WFOY has served St Augustine for more than 80 years. Kris took both stations from AMs to AM-FM simulcast stations to better serve St. Johns County. It is impossible to capture in words the life force that was Kris. She had a challenging life, living with type 1 diabetes and its many consequences from age 11 and later two bouts of cancer. She was a woman of great faith who lived with unbounded exuberance and passion. Her sense of humor and laugh were infectious. In family text chains, no one could outdo her in finding the best meme responses that were both totally on-point and hilarious. We will sorely miss our beloved Krissy. A Celebration of Life will be held in St. Augustine, Florida on Saturday, September 18 at 11:00 a.m. at The Family Worship Center and at a later date in Barrington, Illinois at the Lutheran Church of the Atonement. Private Burial to follow at the Evergreen Cemetery, Barrington, Illinois. In lieu of flowers, please consider making a donation to the Food Pantry of The Family Worship Center in St. Augustine, www.thefwc.tv

Kristine Louise Phillips passed from this world to the next on August 12, 2021 after a long illness. She leaves behind her bereft family; parents, Richard and Joyce Phillips, children Corey and Aubrey Geddings, sisters Marta Phillips and Holly... View Obituary & Service Information

The family of Kristine Louise Phillips created this Life Tributes page to make it easy to share your memories.

Kristine Louise Phillips passed from this world to the next on...

Send flowers to the Phillips family.