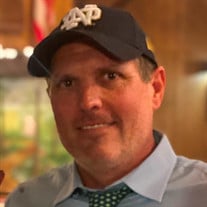 Kevin R. Dellbrugge, age 46, of St. Augustine, passed away unexpectedly on April 29, 2021 in St. Augustine. Kevin was born in Indianapolis, Indiana and grew up in Cameron, Wisconsin. After graduating from high school, he attended the University of Wisconsin and later relocated to Cincinnati, Ohio. He began working in the commercial flooring industry for Dupont Flooring Systems in Cincinnati, where he met his wife to be, Laura Troehler, who was a co-worker at Dupont. Kevin and Laura moved to Florida in 2000 and married on May 25, 2002. Most recently, Kevin had been working for Collaborative Turnkey Solutions, a division of Diverzify. He was a member of the Cathedral Parish, an avid Notre Dame Football fan, and enjoyed boating and fishing. More than anything he enjoyed being a father and watching his son, Tyler, play baseball, and his daughter, Ella, ride horses. He worked hard to give them a good life. Kevin will be greatly missed and his memory will be forever cherished by his family and friends. He is survived by his wife, Laura Dellbrugge, his daughter, Ella Dellbrugge, and son Tyler Dellbrugge, all of St. Augustine; his mother, Ann Dellbrugge of The Villages, Florida; sisters, Patty Gerber and her husband Dave of Wisconsin, Nancy Lipke and her husband Mike of Minnesota, Father and mother in law, Tony & Debbie Troehler, brother in law, Scott Troehler, sister in law, Jamie Flores, and many nieces, nephews and godchildren. He was preceded in death by his father Bob Dellbrugge, and brothers, Dan Dellbrugge and Tim Dellbrugge. A memorial mass will be held at 9 am on Tuesday, May 4, 2021 at the Cathedral Basilica of St. Augustine with Father Tom Willis officiating. Private interment will follow at Our Lady of Good Council Cemetery at a later date. In lieu of flowers, donations in his memory can be made to: Haley’s Comet – Running F.A.R. Foundation, 2205 12 1/8th Avenue, Cameron, Wisconsin 54822. St. Johns Family Funeral Home is in charge of arrangements.

Kevin R. Dellbrugge, age 46, of St. Augustine, passed away unexpectedly on April 29, 2021 in St. Augustine. Kevin was born in Indianapolis, Indiana and grew up in Cameron, Wisconsin. After graduating from high school, he attended the University... View Obituary & Service Information

The family of Kevin Robert Dellbrugge created this Life Tributes page to make it easy to share your memories.

Send flowers to the Dellbrugge family.