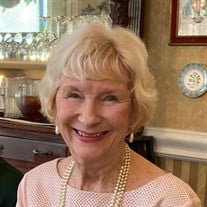 Katharine (Kay) Virginia Bullard McCaffrey passed away peacefully at home on February 26, 2022 surrounded by her family after a brave and extended battle with cancer; she was 83 years old. Kay was born on September 30, 1938 in Wheeling, West Virginia where her family had lived for successive generations dating back to the American Revolution. Daughter of parents Luther Todd Bullard (1891-1982) and Virginia Netting Bullard (1898-1993) she is survived by her husband of over 59 years, Maurice (Mac) Erve McCaffrey and three sons, MG(R) Todd Bullard McCaffrey (Lisa), Brian Erve McCaffrey (Sandy), Daniel Maurice McCaffrey (Nancy), and seven grandchildren who she dearly loved - Michael (Haley), Sara, Andrew, Jessica, Ryan, Kevin, and Madison. Kay was a well-loved, brilliant, and independent woman. Raised in the panhandle of West Virginia, she was a straight A student at Triadelphia High School and attended West Liberty State College (now West Liberty University) where she majored in English, speech, and education and graduated summa cum laude in 1960. She inherited her love of literature, writing, and theater from her parents and encouraged her own sons to read, debate, and learn. Following college, Kay modeled and was then one of the first women in West Virginia to appear on television as the WTRF-TV ‘Romper Room’ teacher, a show oriented on early childhood development. Later she hosted an afternoon program where she met and interviewed public figures of the day. Kay met Maurice (Mac) E. McCaffrey in 1961 and they married on June 30, 1962. Kay and Mac, along with their young sons, moved frequently through the 1960s eventually settling in the small town of Hudson, Ohio which they would call home for over 30 years. Always focused on learning, Kay and a partner opened the first educational preschool in town, The Hudson Nursery School, and for over 20 years helped stimulate early childhood education across a generation of four and five year old children. Kay was a voracious reader and particularly loved history and biographies. Her family was blessed by her ability to prepare anything she found in her large collection of cookbooks. Kay also enjoyed tennis, was member of the Daughters of the American Revolution (DAR) and regularly assisted in local elections. She and Mac traveled internationally with a group of close Hudson friends and continued to maintain ties to their ‘hometown’ even after they retired and relocated to Amelia Island, Florida in 2001. They lived on Amelia Island for 20 years where they enjoyed hosting their many friends, family, and grandchildren. After adopting their first cat in 1967, Kay remained a cat lover with many feline companions over the years; Ringo remains to comfort Mac. A visitation will be held from 1:00-3:00 PM, March 19, 2022 at St Johns Family Funeral Home in St. Augustine, Florida for friends to come by and pay respects to the family. Internment in Hudson, Ohio will follow at a future date. Mac has requested that in lieu of flowers, friends and family consider donating to the National Pediatric Cancer Foundation in Kay’s honor (https://nationalpcf.org/).

Katharine (Kay) Virginia Bullard McCaffrey passed away peacefully at home on February 26, 2022 surrounded by her family after a brave and extended battle with cancer; she was 83 years old. Kay was born on September 30, 1938 in Wheeling, West... View Obituary & Service Information

The family of Katharine "Kay" McCaffrey created this Life Tributes page to make it easy to share your memories.