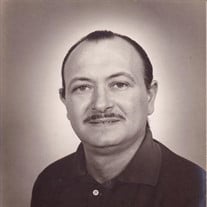 Julius Vig went to be with the Lord on July 19, 2021, at his home in the care of his family in St. Augustine, Florida. Julius was born on February 6, 1940, in Budapest, Hungary. During the Hungarian Revolution in 1956, at the age of sixteen, he joined the popular uprising against the oppressive communist rulers. Without his parents, this boy of 16, fled his homeland after the Soviet army brutally crushed the rebellion. With thousands of others, he was placed in a Yugoslavian refugee camp where he endured harsh conditions and severe illness. He spent nine months in the Yugoslavian refugee camp before arriving in America on October 31 (Halloween night) 1957, New York city. Two days later he arrived in St. Augustine, Florida where he later became a US citizen and built his life and family. His talent was cooking, and he devoted his life to his passion of cooking becoming part owner of the Posada Menendez restaurant. Julius later worked at the Holiday Inn St Augustine Beach Resort before working over 20 years at the Ponce Care Center until retiring at the age of 74. He loved to show off his cooking skills for friends and family. Julius loved sports, sightseeing, fishing, and gardening. He never missed an opportunity to crack a joke and tell a tale of growing up in Hungary. He never took a day for granted and he absolutely loved being an American citizen. He loved watching soccer and was quick to let you know it was the real football. Julius leaves to cherish his memory his two daughters; E’va Elizabeth Vig Bujno and Amy Vig Panek, four grandchildren; Warren David Bilger, Elizabeth Rose Bujno, Julian T Panek, and Emily I Panek, his brother; László Vig, and his beloved cat, Fluffy. In lieu of flowers, donations can be made to the Cancer Research foundation. The website address is https://cancerresearchfoundation.org/donations/ St. Johns Family Funeral Home and Crematory is in charge of the arrangements

Julius Vig went to be with the Lord on July 19, 2021, at his home in the care of his family in St. Augustine, Florida. Julius was born on February 6, 1940, in Budapest, Hungary. During the Hungarian Revolution in 1956, at the age of sixteen,... View Obituary & Service Information

The family of Mr. Julius Vig created this Life Tributes page to make it easy to share your memories.

Send flowers to the Vig family.