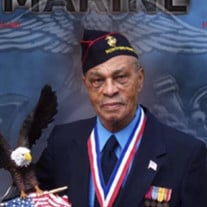 Joe Williams was born on March 28, 1921 in Fitzgerald Georgia. He moved to New Brunswick ,New Jersey in 1925 with his parents and 14 brothers and sisters. He was the first in his family to graduate from high school. He entered into the United States Marine Corps in 1942 as part of the Marines' first African American recruits at the segregated Montford Point Base adjacent to Camp Lejeune, NC. He was later stationed in the defense of The Republic of the Marshall Islands. When he returned in 1945 he married Dorothy Whipple, the love of his life. They had a full military wedding. Joe and Dorothy had two daughters, Linda and Kathy. They lived in Harlem until they bought their first home in White Plains New York. Joe worked at the White Plains school district as a Masonry foreman until his retirement in 1982. In addition to his duties with the school system, he and his wife Dorothy ran a successful daycare center known at Barnyard Day Nursery. Joe and Dorothy were married for 34 years until her passing in 1979. Joe later married Juanita Lane, his high school classmate in 1981. They were married for 22 years until her passing in 2003 in Athens Georgia. Joseph is a member of Mount Pleasant Baptist church in Athens, Georgia. Joe is a lifetime member of the Montford Point Marine Association, a non-profit military veterans organization, founded to memorialize the legacy of the first African Americans to serve in the United States Marine Corps. On June 27, 2012, Joe Williams and some 400 “Original “Montford Point Marines received the Congressional Gold Medal of Honor in recognition of military service during World War II. Joe’s memory will be cherished and kept alive by his daughters Kathy Dawson and Linda Brown, 10 grandchildren, 8 great grandchildren and 1 great- great granddaughter, his sister Thelma Williams and a host of relatives and friends. A graveside service will be held on Monday November 15, 2021, 10:00 am at Ferncliff Cemetery in Hartsdale, New York. The family wishes to thank community Hospice for its thoughtful service and tender care. The family is requesting that in lieu of flowers, that a donation be made in his name to the National Montford Point Marine Association Inc. Scholarship program. National Montford Point Marine Association, Inc. – Scholarships (montfordpointmarines.org) .

Joe Williams was born on March 28, 1921 in Fitzgerald Georgia. He moved to New Brunswick ,New Jersey in 1925 with his parents and 14 brothers and sisters. He was the first in his family to graduate from high school. He entered into the United... View Obituary & Service Information

The family of Joseph Williams created this Life Tributes page to make it easy to share your memories.

Send flowers to the Williams family.