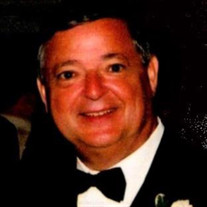 Joseph Albert Graff, age 77, of St. Augustine, Florida passed away on April 12, 2022 surrounded by family. Born December 1, 1944 in Pittsburgh, PA to the late William and Frances (Pauley) Graff, he earned a BSBA from Duquesne University and a Master’s Degree in Taxation from Robert Morris University. Prior to earning his Master’s Degree, Joseph served in the US Army, obtaining the rank of 2nd Lieutenant before being Honorably Discharged in 1968. In 1971 he married Kathleen (Bavolar). They were married for 50 years. Joseph began his career working for Peat Marwick and Mitchell earning his CPA and ultimately started his own accounting firm. He also worked as an accounting professor at Waynesburg University where he became the Dean of Graduate and Professional Studies. In 2008 he retired and moved to Charlotte, NC and later moved on to St. Augustine where he and his family vacationed annually for many years. Joseph loved the theater, music, the Pittsburgh Steelers, reading, traveling and sharing recipes. But more than anything he loved his family and cherished his grandchildren. He is survived by his wife, Kathleen Graff of St. Augustine, FL; loving father of Jennifer Johnson (Tim) of Charlotte, NC and Jonathan Graff of Pittsburgh, PA; cherished grandfather to Timothy, Bridget, Liam and Natalie. He is survived by his siblings, Helen Klemash, Andrew Graff and Mary Iovino. Joseph was a beloved uncle to numerous nieces and nephews. He was preceded in death by his sister, Rosemary Rimkus. A memorial mass will be held at 12:00 PM on Saturday, April 23, 2022 at Corpus Christi Catholic Church. St. John’s Family Funeral Home is in charge of the arrangements. Memorial contributions may be made to Corpus Christi Catholic Church 6175 Datil Pepper Rd., Saint Augustine, FL 32086 or to St. Jude Children’s Research Hospital at www.stjude.org.

Joseph Albert Graff, age 77, of St. Augustine, Florida passed away on April 12, 2022 surrounded by family. Born December 1, 1944 in Pittsburgh, PA to the late William and Frances (Pauley) Graff, he earned a BSBA from Duquesne University and... View Obituary & Service Information

The family of Joseph Albert Graff created this Life Tributes page to make it easy to share your memories.

Send flowers to the Graff family.