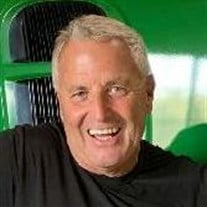 Jon Manford Kreider, age 65, of St. Augustine, passed away on January 20, 2022 at Baptist Medical Center South in Jacksonville, FL. He was born on April 29, 1956, in Kansas City, Missouri, and moved to Orange County, California with his family at the age of 4. Jon attended Villa Park High School in Villa Park, CA and joined the Army before graduating. He finished his education in the Army, trained in Infantry and became a Paratrooper. He served in the 82nd Airborne Infantry Division at Ft. Bragg, N.C. during the Vietnam Era. After his discharge from the Army he returned to Orange County, CA where he pursued various career paths and then focused his career in IT for several grocery store chains including Ralphs, Kroger and Superior for more than 25yrs. After his first wife passed away, Jon met Judy Brizendine, also a recent widower, and the two were married on September 7th, 2002. In 2018 they moved to St. Augustine, FL where Jon worked for Publix at Nocatee. Jon had many interests in life. He loved the beach and enjoyed surfing and body boarding. He had a vast knowledge of music and had an uncanny knack for finding beauty anywhere and everywhere. He was a skilled photographer, and took volumes of pictures, many of which have been published. Jon did nothing in a small way. He was very outgoing with a memorable personality and a big heart, and he could talk to anyone. He attended Turning Point at Calvary Church and was active in the Men’s ministry. He will be deeply missed. He was preceded in death by a sister, LaVonda, and his mother, Verlene. He is survived by his loving wife, Judy Brizendine of St. Augustine, FL.; his son, Clint Nolan Kreider of Orange County, CA.; a stepdaughter, Kelly D’Innocenti of St. Johns, FL.; his father, John Kreider and wife Betty of Newport News, VA.; a brother, Richard Kreider and wife Jolinda of Washington State; a sister, Cindy Dixon of Arizona; and a grandson, Anthony D’Innocenti of St. Johns, FL. A celebration of Jon’s life will be held at 11 am on Monday, January 31, 2022 at St. Johns Family Funeral Home with Rev. Matt Schonder officiating. A visitation beginning at 10 am will precede the service. Those unable to attend can view the service live streamed at https://iframe.dacast.com/b/156599/c/549019 . The family request that in lieu of flowers, and gifts be directed to Turning Point at Calvary Church’s Building Fund. St. Johns Family Funeral Home is in charge of arrangements.

Jon Manford Kreider, age 65, of St. Augustine, passed away on January 20, 2022 at Baptist Medical Center South in Jacksonville, FL. He was born on April 29, 1956, in Kansas City, Missouri, and moved to Orange County, California with his family... View Obituary & Service Information

The family of Jon Manford Kreider created this Life Tributes page to make it easy to share your memories.

Jon Manford Kreider, age 65, of St. Augustine, passed away on...

Send flowers to the Kreider family.