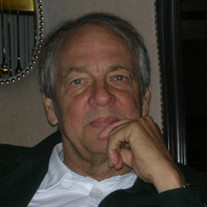 John van Olphen, 75, of St. Augustine, Florida passed away Wednesday April 7, 2021 at the Bailey Center for Caring. Jan (John) van Olphen was born on March 26, 1946 in Amsterdam, the Netherlands as the fourth child of the late Hendrik and Guliana Benjamina Scharp van Olphen. John moved to Bellaire, Texas in 1951 (at age 5) with his family and became an American citizen in 1956; his name was officially changed to John Hendrik van Olphen. He attended Bellaire schools and Antioch College in Yellow Springs, Ohio. He married Carol Conway of Bedford, OH in 1967 and then attended University of Utrecht School of veterinary medicine (the Netherlands) where their first child was born. After graduating, they moved to South Florida in 1974 where he started working as a veterinarian and their second child was born. The family relocated to St. Augustine, Florida where he opened St. Augustine Animal Clinic. John continued practicing veterinary medicine for 25 years in St Augustine while opening many other clinics in North Florida. John was a devoted father to his two children. If he wasn’t working as a veterinarian, he was spending time with his family. He loved to travel both domestically and internationally, always interested in local history. He was an avid football fan, especially of the Jacksonville Jaguars, and loved to attend games. He enjoyed spending time with his companion, Rachelle Parthoens of Belgium and with his local, longtime friends. He was also an active member and deacon at Anastasia Baptist Church for many years. John was predeceased by his parents and two sisters Guliana and Carolina, and his wife, Carol. John leaves two sisters and a brother Wilhelmina of Vermont, Juliana of Virginia and Herman of Texas, his companion, Rachelle Parthoens of Belgium, his two sons, Kevin van Olphen of St. Augustine and Chris van Olphen of Atlanta and 4 Grandchildren, Kaylee, Tyler, Brandon and Sarah. St Johns Family Funeral Home is in charge of his arrangements.

John van Olphen, 75, of St. Augustine, Florida passed away Wednesday April 7, 2021 at the Bailey Center for Caring. Jan (John) van Olphen was born on March 26, 1946 in Amsterdam, the Netherlands as the fourth child of the late Hendrik and Guliana... View Obituary & Service Information

The family of John Hendrik van Olphen created this Life Tributes page to make it easy to share your memories.