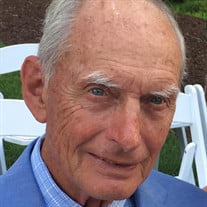 John Speichert, 81, passed away peacefully at home on May 16, 2022. He was born on January 11, 1941 in Philadelphia, PA. John is survived by his loving wife of 50 years in marriage, Joyce Speichert. At the age of 17, John joined the U.S. Air Force and was stationed in Laon, France until he was discharged in 1962. After the military, he attended LaSalle University in Philadelphia and graduated with a Bachelor’s degree in Industrial Engineering. It was after college that John moved to New Jersey to work for American Standard and it was there where he met his bride, Joyce. John and Joyce married in 1971 and started their family with the birth of their son, Eric followed by the arrival of twins, Emily and Allison. The family moved to Virginia in 1982 and then Florida in 1996 as John continued his work as a Corporate Trust Administrator. After 35 years in the banking industry, he retired as Vice President from Wells Fargo Bank in 2006. John loved to play his favorite sport of golf and could be found on the golf course every Saturday. John’s parents were Wilhelm and Mary Speichert (deceased) who raised two other children William Speichert (deceased), and Eileen Agnew (Bensalem, PA). John is survived by his three children: Eric Speichert and his wife Najla, and their children Alexander and Christopher (Lancaster, PA), Emily Meng and her husband, Christopher and their children Asher and Audrey (Melbourne, FL), Allison Hayhurst and her husband Matthew and their children Ryan and Drew (Raleigh, NC), many nieces and nephews and great-nieces and great-nephews. A Byzantine Catholic Liturgy will be held on Thursday, May 19, 2022 @ 11 a.m. at St. Johns Family Funeral Home and Crematory, 385 State Road 207, St. Augustine, FL 32084. (904) 824-1625 www.stjohnsfamilyfuneralhome.com John will be buried at the Jacksonville National Cemetery in Jacksonville, Florida with full military funeral honors followed by a luncheon. Burial information to be announced at a later date. Family and friends are invited to attend this memorial. In Lieu of Flowers, donations may be made to The Alzheimer’s Association (alz.org) or Community Hospice of NE Florida (communityhospice.com)

John Speichert, 81, passed away peacefully at home on May 16, 2022. He was born on January 11, 1941 in Philadelphia, PA. John is survived by his loving wife of 50 years in marriage, Joyce Speichert. At the age of 17, John joined the U.S. Air... View Obituary & Service Information

The family of John Speichert created this Life Tributes page to make it easy to share your memories.

Send flowers to the Speichert family.