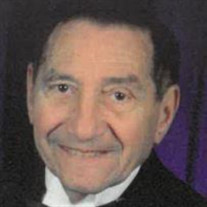 John E. Speciale was born to Nunzio and Ida Speciale in East Boston, MA on January 27, 1925. He passed away in St. Augustine, FL on December 8, 2020 due to advanced stages of dementia. After graduating from East Boston High School in 1943,... View Obituary & Service Information

The family of John Edward Speciale created this Life Tributes page to make it easy to share your memories.

John E. Speciale was born to Nunzio and Ida Speciale in East...

Send flowers to the Speciale family.