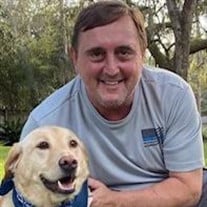 John Albert Schroepfer, age 54, passed away unexpectedly on Sunday, March 20, 2022 at his home in St. Augustine, Florida. He was born to Roger and Barbara (Schmeichel) Schroepfer on June 16, 1967, in Saline, Michigan. He grew up in Brighton, Michigan and moved to Spring Hill, Florida as a teenager, graduating from the Frank W. Springstead High School with the Class of 1985. John joined the US Marine Corps right out of high school and served in Desert Storm. After returning from deployment, he served as a Drill Instructor at the Marine Corps Recruit Depot at Parris Island, SC. Discharged after 6 years of service, John joined the US Customs and served as a Customs Officer from 1991 to 2000. He then served as a Senior Special Agent with ATF for over 22 years; serving in the Charleston field office for 15 years and was currently assigned to the ATF field office in Jacksonville. During his tenure with US Customs and ATF, John also served as a Reservist with the US Coast Guard Investigative Services. He loved his work and was extremely good at what he did. He was especially devoted to his wife, Cori, who preceded him in death just 12 weeks ago. He loved nothing more than to spend time with Cori and his family. John had a great sense of humor, was generous and was a loyal friend. He always put others first and was always the first to step up in a time of crisis. He was a natural leader. “He was the kind of friend a friend would like to have.” He will be deeply missed. He is survived by his son, John Andrew Schroepfer of Jacksonville Beach; his daughter, Coco Gay (Drew) of Katy, TX; his mother, Barbara Fairmuth of Summerville, SC; his father, Roger Schroepfer (Karen) of Brighton, MI; a sister, Lisa Coan; brothers, Mike Elder, Brandon Elder, Vince Speakman; and grandchildren, Sophia, Carter & Griffin. A memorial service with military honors will be held at 2:30 pm on Saturday, April 2, 2022, at Ravenswood Barn, 4705 Chisolm Road, Johns Island, SC 27455. St. Johns Family Funeral Home is in charge of arrangements.

John Albert Schroepfer, age 54, passed away unexpectedly on Sunday, March 20, 2022 at his home in St. Augustine, Florida. He was born to Roger and Barbara (Schmeichel) Schroepfer on June 16, 1967, in Saline, Michigan. He grew up in Brighton,... View Obituary & Service Information

The family of John Albert Schroepfer created this Life Tributes page to make it easy to share your memories.

Send flowers to the Schroepfer family.