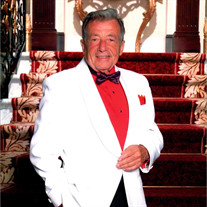 Johann “John” Schaffa, 90, passed away Friday, February 11, 2022 at The Bailey Center Community Hospice in St. Augustine, FL. He was born in Mikulov (Nikolsburg), Czechoslovakia to Julius and Rudolfine Hahn. At the age of 8, John and his family fled Nazi persecution, finding refuge in the United Kingdom, first in living in repurposed castles throughout Wales and eventually settling in London at the end of the war. The Schaffa Family ran a popular kosher restaurant in Mikulov and carried on with their culinary vocation in their new home. John followed in their footsteps, becoming a baker while also serving in the British Royal Force and completed his baking apprenticeship while working as a ski instructor in Switzerland. Eventually John expanded his baking career to San Francisco and New York City but by the mid-1960s, his interest in baking grew stale. Despite never receiving a high school diploma, John successfully gained entry to New York Community College and eventually Queens College, where he earned a Bachelor of Arts, and then Hunger College, where he earned a Master of Social Work. During this time, John obtained dual American and British citizenship, allowing him to begin his second career with the New York State Department of Mental Health, first as a Social Worker for Creedmoor Psychiatric Center in Queens, NY and retiring as the Associate Director of Harlem Valley Psychiatric Center in Wingdale, NY in 1991. After successfully transitioning careers, John was introduced to his wife, Isabel Gonzalez through a local dating service in 1980. The two married on February 25, 1982, relocated to Mt. Kisco, NY, and welcomed their daughter, Cassandra in July of 1983. Following John’s retirement, the family moved to Beverly Hills, FL in 1994. After their daughter graduated from Flagler College in 2005, John and Isabel took up residence in St. Augustine, FL, where John would spend his final years. John maintained many hobbies and creative interests throughout his career and retirement. He was an avid Arsenal futbol fan, swimmer, and distance runner. He excelled in oil painting, photography, and continued to bake for his family and friends. He engaged in genealogical research to preserve his family history through writings, photos, and connecting with lost relatives and members of the community in his hometown of Mikulov. John and Isabel loved to dance and travel on cruises all around the world. John and his daughter shared a love of animals, and in particular, he was well known in his neighborhood of Vista Cove as the man who walked many laps to pet all the dogs. John is survived by his wife of 40 years, Isabel; daughter, Cassandra; grand dog, Rhett; grand cats Buster and Charlie; nephew Steven; niece Alison; grand-nephews Marc and Freddie; grand-nieces Rebecca and Hannah; great grand-niece Sophie; great grand-nephew Charlie; and cousins Maggie, Lixi, Helen, and Francine. He was preceded in death by his parents, Julius and Rudolfine; brother, Eric; and sister-in-law Jackie. A Celebration of Life will be held Friday, February 18, at 3:00 PM EST at St. Johns Family Funeral Home, followed by a reception with light refreshments at the Vista Cove Club House, located at 1916 Vista Cove Rd, St. Augustine, FL 32084. Covid-19 safety protocols will be in effect. For those unable to attend, you may watch a live stream of the service by clicking on this link https://iframe.dacast.com/b/156599/c/549019 A reception will follow the services and will be held Friday, February 18, 6:00-9:00pm at the Vista Cove Club House. The address is 1916 Vista Cove Rd St. Augustine, FL 32084. In lieu of flowers, please donate in memory of John to Doctors without Borders. https://donate.doctorswithoutborders.org/ St. Johns Family Funeral Home & Crematory is in charge of the arrangements.

Johann &#8220;John&#8221; Schaffa, 90, passed away Friday, February 11, 2022 at The Bailey Center Community Hospice in St. Augustine, FL. He was born in Mikulov (Nikolsburg), Czechoslovakia to Julius and Rudolfine Hahn. At the age of 8, John... View Obituary & Service Information

The family of John Schaffa created this Life Tributes page to make it easy to share your memories.

Send flowers to the Schaffa family.