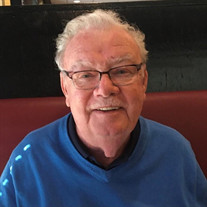 John “Jack” MacKenzie passed away on January 12, 2021, after a long and brave battle with interstitial lung disease. He passed at the Bailey Center for Caring in Saint Augustine, Florida, surrounded by his loving family. Jack was born in Sydney, Nova Scotia, Canada to Angus and Florence MacKenzie. At 16, he left Sydney to attend Saint Francis Xavier University, where he obtained a Bachelor of Commerce degree. While vacationing in Bermuda in 1965, he met the love of his life, Linda Mayfield. Jack proposed on the same day as their meeting, and they spent 54 beautiful years together. Their love and devotion to one another remained deep until the day of his passing. Linda supported Jack in all his goals, including his desire to own his own business. Jack had a lifelong career in the car industry. After years of hard work, he realized his dream of owning a dealership. In 1976, he acquired Hopkins Ford in Jenkintown, Pennsylvania, which he owned and operated with his partner and friend. They worked diligently to grow the business to include Lincoln Mercury, Hyundai, and Pontiac Franchises. Jack loved his work and ran this successful business for 37 years until his retirement in 2012. He also held leadership roles in dealer advertising for Ford Motor Company at national and regional levels. Jack was known for his love of golf and was a longtime member of Riverton Country Club. He played golf at every opportunity, and all over the world. He shared his passion for the sport with his children and his grandsons. Jack was an avid Villanova Basketball fan. He rarely missed a game. Jack’s greatest passion, however, was his family. He was a devoted husband to Linda and a loving father to Allisa Yeager (Dave), Jackie MacKenzie, and Sean MacKenzie (Kim). He was also the beloved grandfather to Jack, Maddy, Lauren, Steven, and Kaitlyn. His love knew no bounds when it came to these children, who lovingly referred to him as “Puba.” Jack is also survived by his brother Donald Mackenzie (Brenda) of Port Dover, Ontario, Canada and his sister Emily Mac Vicar (Norman) of Ardie, Alberta, Canada. His sister Elizabeth Young preceded him in death; Jack missed her greatly until the day he died. Jack was a very faithful person. He was a devout Roman Catholic and a member of Saint Mary of the Lakes Church in Medford, New Jersey, and Saint Anastasia Church in Saint Augustine, Florida. His faith in God was strong and carried him through those most difficult days before his passing. A funeral mass was held on Friday, January 15th. A full memorial mass and reception will be held as soon as the Canadian border re-opens and Jack’s entire family can participate in the service. Future services are to be announced, and all will be welcome. In lieu of flowers, donations may be made in Jack’s name to support medical research at the Mayo Clinic in Jacksonville, Florida.

John &#8220;Jack&#8221; MacKenzie passed away on January 12, 2021, after a long and brave battle with interstitial lung disease. He passed at the Bailey Center for Caring in Saint Augustine, Florida, surrounded by his loving family. Jack... View Obituary & Service Information

The family of John Urban MacKenzie created this Life Tributes page to make it easy to share your memories.

Send flowers to the MacKenzie family.