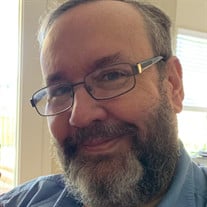 Jack Hogue of St. Augustine, Florida, passed away on August 17th, 2021. Born October 1st, 1962 to Roy E. and Sally J. Donovan Hogue of Penn Hills, Pennsylvania. Jack was a light to others, always equipped with a huge smile and a gleam in his eye. He graduated from Penn Hills High School in 1980, where he explored a love of drama and song with his dear friends, performing the lead in “Harvey” his senior year, and even writing and directing his own One-act play, titled “The Sword of Krandor,” which was very well received. Jack graduated with a Bachelor of Arts degree in Drama & Mass Communications from the Franciscan University of Steubenville in 1983. He worked in Television for many years as a Writer, Director, Producer, Technical Director, etc.; founded a dot-com Internet dial-up business with his good friends; before he and his wife, Stefanie, went on together to pioneer an IT enterprise serving small businesses, where he worked happily as an IT consultant / Chief Technical Officer and Networking Administrator for the remainder of his career. Jack met the love of his life, Stefanie Sue Hutchison, at Cornerstone TeleVision. They married one year later on August 8th, 1987. Together with his wife, Jack built a beautiful family of 9, with 6 sons and 1 daughter. During his free time, Jack could be found cracking dad jokes, praying, enjoying a trip to the movies with his family, fighting lynels in The Legend of Zelda: Breath of the Wild, or sipping on a glass of whiskey on the rocks. Jack and Stefanie raised their family at St. Bernadette Catholic Church in Monroeville, Pennsylvania, where they served for over 10 years on the Pastoral Council. After their move to St. Augustine, Florida, Jack and Stefanie became members of Our Lady of Good Counsel Catholic Church where they together led prayer and songs at Daily Mass. Also, this past June, together they were able to travel with Triumph Pilgrimages to Medjugorje, where Jack was quickly loved by his fellow pilgrims. Jack spent much of his life doing what he loved, using his gift of song to bless others and rejoice in his love for God. Jack was a truly beautiful soul, a deeply loving father, a faithful friend, a steadfast brother and son, a devoted husband, and a joyful son of God. May his radiant spirit live on in all of those whom he loved. He is survived by his wife of 34 years, Stefanie Sue Hutchison Hogue; 7 children, Jon (Anya) Hueing, Joseph (Lauren) Hogue, Sean Hogue, Daniel Hogue, Conner Hogue, Elise Hogue, and Matthew Hogue; grandchildren, Joseph Robert Hogue and his brother-on-the-way; also by his brother, Timothy D. (Robyn) Hogue; and his nieces, Sydney Hogue and Giselle Hogue. He was preceded in death by his mother, Sally J. Donovan Hogue, who passed on June 20, 2021 on the Feast of the Immaculate Heart of Mary; and his sister, Bonnie Ann Hogue, who passed on October 16, 2020; as well as his father, Roy Edward Hogue, who passed on September 29, 2013 on the Feast of the Archangels, St. Michael, St. Gabriel, and St. Raphael. The funeral mass for friends and family in Florida will be celebrated at Our Lady of Good Counsel Catholic Church, 5950 State Road 16, St. Augustine, FL 32092 on Wednesday, September 1, 2021 with visitation in the church from 9 am to 9:45 am and Holy Mass beginning at 10 am. There will be a Private Family Gathering for immediate family afterward. Friends and family in Pittsburgh will be received at Charles W. Trenz Funeral Home, 11110 Frankstown Road, Pittsburgh, PA 15235 from 6 pm to 8 pm on Thursday, September 9, 2021 and also on Friday, September 10, 2021. A funeral mass will be celebrated on Saturday, September 11, 2021 at 10 am Mary, Mother of God Parish, St. Angela Merici Church, 1640 Fawcett Avenue, White Oak, PA 15131. PLEASE MEET AT THE CHURCH. After the funeral mass, interment will take place at Good Shepherd Catholic Cemetery, 733 Patton Street, Monroeville, PA 15146.

Jack Hogue of St. Augustine, Florida, passed away on August 17th, 2021. Born October 1st, 1962 to Roy E. and Sally J. Donovan Hogue of Penn Hills, Pennsylvania. Jack was a light to others, always equipped with a huge smile and a gleam in his... View Obituary & Service Information

The family of John Christopher Hogue created this Life Tributes page to make it easy to share your memories.

Send flowers to the Hogue family.