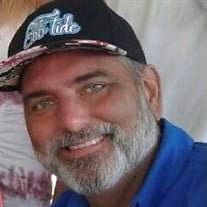 On March 9, 1971 Dr. John Christian Derickson was born at Mercy Hospital, in Toledo, Ohio, the youngest of three children. He grew up in Elmore, Ohio where he was educated at Woodmore Schools, graduated in 1988, and enrolled in University of Toledo, obtaining a Bachelor of Science degree in Business. He then enlisted in the US Navy where he achieved the top student status in his A School and spent his time in the Navy as a Yeoman. When he was discharged from the Navy, he entered Nova Southeastern Medical University and became an Optometric Physician. Upon graduation, he moved to Jacksonville, Florida where he established the Derickson Vision Center, which was in operation for 24 years. During that time, he obtained a Masters in Business, a private pilot’s license, was an active member of his church and the Rotary Club. Dr. Derickson currently practiced at Eye-Style Optical in Palm Coast and St. Augustine, Florida. Dr. John Derickson contracted Covid and was admitted to Flagler Hospital Intensive Care where he spent 10 days in intubation. He lost his life on August 20, 2021 with his wife Shaunna at his bedside. He has gone home to be with the Lord. Dr. Derickson is survived by his wife Shaunna (Peretto) Derickson, his daughters Kathleen (Katie) of Nashville, TN, Cassaundra (Cassie) of Jacksonville, his son Evan of Jacksonville, and stepsons, Court Machtolff and Brant Machtolff of Guthrie, Oklahoma, his parents Kathleen (Rymers) Derickson and James Derickson of Palm Coast, FL, his sisters Kelly (Derickson) Alba, of San Antonio, Texas and Elizabeth Derickson of Indian Harbor Beach, FL as well as several nieces and nephews. John’s family was the pride and joy of his life, and he was happiest when he was able to share his favorite activities with them. He enjoyed boating, fishing, diving, flying, traveling – the more adventuresome, the better. John always lit up a room with his loving eyes, captivating smile, clever sense of humor and contagious chuckle. He will be greatly missed by so many whose lives he touched throughout his 50 years. A Celebration of Life will be held at a later date. In lieu of flowers the family requests contributions to Midwestern Children’s Home, Box 48, Pleasant Plain, Ohio, 45162 or a charity of your choice. St Johns Family Funeral Home is in charge of services.

On March 9, 1971 Dr. John Christian Derickson was born at Mercy Hospital, in Toledo, Ohio, the youngest of three children. He grew up in Elmore, Ohio where he was educated at Woodmore Schools, graduated in 1988, and enrolled in University of... View Obituary & Service Information

The family of Dr. John Christian Derickson created this Life Tributes page to make it easy to share your memories.

Send flowers to the Derickson family.