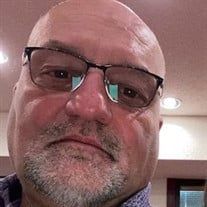 John Steven Anderson, 61, passed away September 21,2021 at Baptist Hospital South in Jacksonville. He was born in Alexandria, Louisiana to John V Anderson and Helen Bangert shortly before his father, a veteran of WWII, retired from the US Air Force. The family moved to Bay City, Michigan where John grew up and went to school before he enlisted in the US Marine Corps on his 18th birthday. In 1982, after 4 years in the Marine Corps John made his way to St Augustine where he lived the rest of his life. John enlisted in the Florida Army National Guard in the 3/20th Special Forces Group and also worked for the City, the Florida East Coast Railroad and Detroit Diesel Service before he struck out on his own and following his entrepreneurial spirit he started and ran several businesses including Coastal Automotive and Diesel Service, a Line-X franchise, Energy-Foam of North Florida, and EMP Provisions. He was semi-retired at the time of his death. John enjoyed fishing, traveling, and politics and supported numerous conservative candidates and causes as well as religious organizations and broadcasters. John is survived by his wife of just 8 months, Beth; and three step- grandchildren; Jaxon, Nixon, and Tora. He has a surviving sister, Patty in Bay City, Michigan; a brother Mike and sister-in-law Leigh Ann in Grand Rapids, Michigan. He was preceded in death by his parents, John in 2012 and Helen just this past May. A Celebration of Life will be held Monday, October 4th, at 11:00 AM at First Conservative Baptist Church, 12021 Old St Augustine Road, Jacksonville, FL 32258. A graveside service with military honors will follow at the Jacksonville National Cemetery 4083 Lannie Rd, Jacksonville, FL 32218 at 2:00 PM. Friends and family are invited to attend either service or both. In lieu of flowers please consider an offering to First Conservative Baptist Church. St Johns Family Funeral Home & Crematory is in charge of the arrangements.

John Steven Anderson, 61, passed away September 21,2021 at Baptist Hospital South in Jacksonville. He was born in Alexandria, Louisiana to John V Anderson and Helen Bangert shortly before his father, a veteran of WWII, retired from the US Air... View Obituary & Service Information

The family of John Steven Anderson created this Life Tributes page to make it easy to share your memories.

Send flowers to the Anderson family.