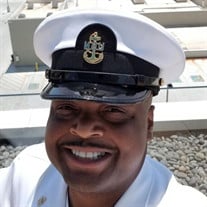 The world lost a beautiful soul on Thursday June 17, 2021 with the unexpected passing of Jefferson Bonnet (affectionately known as Jeff), 37 years of age. Jefferson Bonnet was born on January 1, 1984 in Port Au Prince, Haiti to parents Enide Joissaint and Jacques Bonnet. Jeff migrated to the U.S at the tender age of 4 and spent much of his younger years in Florida. He graduated from Inlet Grove Community High School and later completed an Associate degree at Thomas Edison State University. Jeff joined the U.S Navy as a Seaman Apprentice (E-2) in 2006 at the age of 22. During his term in the Navy, his professional drive, dedicated work ethic, and overall tenacity led to much of his career’s success. Jeff’s fellow shipmates would often refer to him as passionate, a great leader/mentor, selfless and personable. Jeff’s work was recognized as he was advanced to Chief Petty Officer (E-7), a rank he maintained until his passing. To the naked eye Jeff often appeared quite intimidating and stern, however underneath the tough exterior was a man with a heart of gold and a great sense of humor. Jeff was very playful and quite the jokester. He loved to laugh and had a smile like no other. Jeff always sought out means to enrich himself and his family, there wasn’t anything Jeff wouldn’t do for his loved ones. Jeff was greatly protective of his mother, Enide who often referred to her son as “Prince.” Jeff was his mother’s pride and joy. He was adored by his father, Jacques who was always proud of his son and all of his accomplishments. Jeff was a great leader and role model to his younger siblings, he set a great example for them all. In 2009, Jeff met his wife Brittany Bonnet in San Diego, California. They married 5 years later on March 14, 2014. The pair spent a great portion of their life growing and learning together and creating many joyous memories. The two were inseparable. Jeff and his wife became first-time parents in 2018 to their beautiful daughter, Enilia Bonnet. Jeff always made sure to create new experiences for his family and himself. In the latter years of his life, he enjoyed spending quality time with his wife and daughter. Jeff was a devoted husband and father, family was his top priority. In his spare time, Jeff enjoyed mountain biking and hiking with either his navy buddies, wife or father in laws. He loved cooking; everything was Jeff’s specialty as there wasn’t a dish that he did not perfect. During Jeff’s life, he lived for adventure. Jeff visited a myriad of cities and countries as he loved to travel and have new experiences. Jeff had a great appreciation for music with 90’s rap and alternative being amongst his favorites. Jeff lived his life to the fullest and provided those who knew him with wonderful memories to forever hold on to. Jefferson is survived by his loving wife, Brittany Ann Bonnet; children, Enilia J. Bonnet, and a daughter on the way; his mother, Enide Joissaint; father, Jacques Bonnet, grandmother, Marie Benoit; brothers, Samuel Bonnet, Jordany Elveus and Trevor Vaughan; sisters, Samedrew Joissaint, Samantha Bonnet and Kessy Bonnet; nephew, Adonai J. Dennis, Karmine Gibson, and Zander Aca; niece, Amari Joissaint; mother in law, Odilia Ivie and Julia Gibson; father in law, William G. Gibson and Jake Ivie; sister in law, Chelsey Green, Caroline Gibson, and Lauren Gibson; brother in law, Kyle Gibson and John Green, and a host of aunts, uncles and cousins. He was preceded in death by Starfire their angel baby. He leaves a legacy of faith, hope, laughter and love for all who knew him personally. Jefferson Bonnet will surely be missed by his family and friends. The memories of him will forever remain in their hearts. A graveside service will be held on Friday July 9, 2021 at 1100 at the Cape Canaveral National Cemetery located at 5525 US-1, Mims, Florida 32754. The service will be followed by a banquet at Lakeside Community Center 1999 City Center Cir, Port Orange, FL 32129 from 1300-1700 to celebrate Jeff’s life. All are welcome St. Johns Family Funeral Home is in charge of arrangements.

The family of Jefferson Bonnet created this Life Tributes page to make it easy to share your memories.

Send flowers to the Bonnet family.