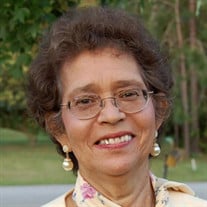 Jeanette Yolanda Cohn, age 77, of St. Augustine, passed away on August 8th, 2021, at Mayo Clinic in Jacksonville, Florida. She was born to Jean Baptiste Leopold and Uranie Marie (Gumbs) Duzant in Saint Thomas, U.S. Virgin Islands. In her teenage years Jeanette met the love of her life, Garry Louis Cohn, who was a US Navy sailor stationed in Norfolk, VA. Garry and Jeanette continued a long distance relationship for three years. Garry returned to the island after his discharge from the navy to live near Jeanette. Soon after Jeanette and Garry married on June 22, 1961. Jeanette and Garry began their life together in New Jersey, raising a family of four children. In 1989, after her children were mostly grown, they moved to Saint Augustine, Florida. Jeanette was a wonderful wife, mother and homemaker. She loved caring for her family and especially enjoyed spending time with her grandchildren. She had a passion for gardening and enjoyed keeping her home beautiful all year long. Jeanette was a devout Catholic from an early age and was a longtime member of Corpus Christi Catholic Church. Jeanette was loved by her family, church and community and she will be deeply missed. She was preceded in death by her son, Jeffrey Cohn, Sr. and grandson, Jeremy. She is survived by her husband of 60 years of marriage, Garry L. Cohn of Saint Augustine; daughters, Patricia “Paddy” Kemp (Marcus) of New Jersey, Kimberly Reeves (Billy) of Saint Augustine; son, Garry Cohn, Jr. of Dublin, Ireland; brother, Rudolph Duzant of Jacksonville, Fl.; grandchildren Jeffrey Jr., Christopher, and Michael Cohn; Aemelia, Jordan, and Lucas Reeves; Gabriella Jones; and great grandson, Micah. She was also survived by many other brothers and sisters who live all around the world. A visitation will take place Thursday, August 12th from 6 to 8pm, with a Vigil service at 7 pm, at St. Johns Family Funeral Home. Followed by a funeral mass on Friday, August 13th, at 10:30am at Corpus Christi Catholic Church with Father Edward Murphy. Interment at Craig Memorial Park will follow the service. In lieu of flowers, donations in Jeanette's memory can be made to: Susan G. Koman for the Cure at www.komen.org. St. Johns Family Funeral Home is in charge of arrangements.

The family of Jeanette Yolanda Cohn created this Life Tributes page to make it easy to share your memories.

Send flowers to the Cohn family.