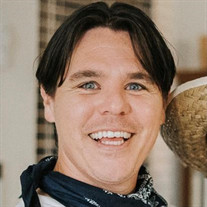 Jarren “Jake” Bicknell, 36, passed away February 27, 2021 in St. Augustine, FL. He was born in Colchester, Vermont to Mike Bicknell and Lorraine Jones. He moved to Florida in 2002 and graduated from the University of North Florida before becoming a CPA. He stayed true to his home roots and was a devoted New England fan. He was a loving husband, father, son, brother, and friend. Upon completing his education, he took a position at GE and found great success in his department. Jake was known around the office as a friend to everyone and was loved for his wit, intellect, and quick humor. Jake and his wife, Alexandra were married in July of 2011, and they welcomed their son Javier in September of 2018. He loved spending time with his son and adored his entire family. Jake was an avid car enthusiast and had a great passion for his Ford Mustang. His other hobbies included playing guitar, diving, surfing, and playing with his dogs, Toby and Brody. Jake brought energy into every room he set foot in with a funny anecdote or a sharp joke; and he was always there to offer a helping hand. Everyone he knew felt his warmth and appreciated his positive energy. Jake is survived by his beloved wife of almost 10 years, Alexandra; son, Javier; brothers, Ryan, and Billy; sisters Renee, and Heather; father, Mike; stepmother, Margie and a large extended family who will miss him dearly. A private mass will be held in his honor at the church where Alexandra and Jake were married in Largo, Florida. St. Johns Family Funeral Home is in charge of arrangements.

Jarren &#8220;Jake&#8221; Bicknell, 36, passed away February 27, 2021 in St. Augustine, FL. He was born in Colchester, Vermont to Mike Bicknell and Lorraine Jones. He moved to Florida in 2002 and graduated from the University of North Florida... View Obituary & Service Information

The family of Jarren "Jake" Bicknell created this Life Tributes page to make it easy to share your memories.