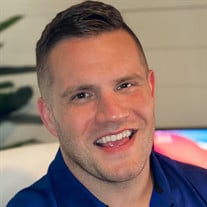 Jared Galen Bridegan, age 33, of St. Augustine, was tragically taken from his family and friends on February 16, 2022 in Jacksonville, Florida. Jared was born to Gaylord and JoAnn Bridegan on June 29, 1988 in Warrensburg, Missouri. He moved with his family to Jacksonville at a young age and graduated from the Douglas Anderson School of the Arts with the class of 2007. He attended Utah Valley University, graduating in Spring of 2014 with a B.S. degree in Digital Media with an emphasis in Cinema Production. Jared had a longtime interest in videography and was an accomplished User Experience (UX) Designer. He served as Senior UX Designer at Canopy, Director of UX at Web.com, Chief Technology Officer at Clean Simple Eats, and was currently a Senior Design Manager at Microsoft. His highest purpose in life however was his role as husband to Kirsten and as father to Liam, Abigail, Bexley and London. In a recent Facebook post, Jared summed up his priorities in life: first was his relationship with his Heavenly Father and His son Jesus Christ, second was his relationship with his eternal companion, best friend, and wife Kirsten, and third was the privilege of being the father to his children. These priorities and his firm belief that one day he would kneel before the Savior to give an accounting of his life on earth shaped his every decision. And what a difference it made! Jared was an awesome husband, father, son and friend to many. More than anything in life he enjoyed spending time with his children: building a playhouse in the backyard, creating a laser tag arena in the garage; Jared seemed to have endless energy creating memories with his children. One of his favorite hobbies was home improvement, especially when working alongside his wife. Together they handcrafted wooden beams for the master ceiling, built a custom fireplace and office desk, shiplapped walls, and so much more. Jared was also the guy in the neighborhood who would loan you his tools…and then show up to help you with your project! He was “funny”, “happy-go-lucky” and even a bit shy, but a powerful presence in the lives of those he loved. He recently served in The Church of Jesus Christ of Latter-Day Saints as a Sunday School teacher to 11 and 12 year old youth who expressed gratitude for the “fun” he brought to church through his creative object lessons and humorous stories he would share as he taught them about the Savior. He will be deeply missed. He is survived by his beloved wife, Kirsten Bridegan, his children, Liam, Abigail, Bexley and London; his parents, Gaylord & JoAnn Bridegan of Windemere, FL.; sister, Ashley Jenkins and her husband Mike of St. George, Utah; brothers, Justin Bridegan and his wife Gwen of Jacksonville, Adam Bridegan and his wife Karlee of Draper, Utah; and maternal grandmother, Josephine Krez. A private memorial service will be held in his honor and the family expresses their sincerest gratitude for all the love, prayers, and support they’ve received from friends, family, community, and strangers from all over the world.

Jared Galen Bridegan, age 33, of St. Augustine, was tragically taken from his family and friends on February 16, 2022 in Jacksonville, Florida. Jared was born to Gaylord and JoAnn Bridegan on June 29, 1988 in Warrensburg, Missouri. He moved... View Obituary & Service Information

The family of Jared Galen Bridegan created this Life Tributes page to make it easy to share your memories.

Send flowers to the Bridegan family.