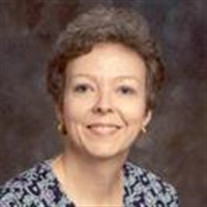 Janet Ann Harris Collins, age 77 of St. Augustine, Florida, died peacefully on November 10, 2021 at the Bailey Family Center for Caring in St. Augustine of complications from Alzheimer. She was born in Wilmington, Delaware and spent her early years in Texas, after which Janet resided in the Western and Northeastern parts of the US. She was a graduate of Alfred I. duPont High School in Jacksonville, Florida and played string bass in the concert band and flute in the same nationally famous marching band. She graduated with a BS degree from Florida State University in 1968, and later earned an MA from the University of North Florida. In addition to being a devoted mother and homemaker, Janet had a decades long career teaching at the Mill Creek Elementary School where she was named, "Teacher of the Year." Her living in Montana gave her a deep affinity for the "Big Sky," mountains and open spaces. In later years, her loving sons took her for vacations in the mountains of North Carolina and Montana. One very special vacation was an extensive tour of Alaska. She is survived by her three sons, Michael A. Collins, Sean P. Collins and Chad T. Collins; granddaughter, Tayler Collins, and grandsons, Carson Collins, and Devon Collins. Janet is also survived by her former husband, Gerald M. Collins with whom she continued a relationship of honor and support. She was predeceased by her parents, Robert S. Harris and Juanita Cartwright Harris, and her older brother, Robert Harris. A Celebration of Life will be scheduled. In lieu of flowers, donations may be made in Memory of Janet A. Collins, to the Community Hospice Bailey Family Center for Caring, Flagler Hospital, 200 Health Park Blvd, St. Augustine, FL 32086, (904) 268-5200

Janet Ann Harris Collins, age 77 of St. Augustine, Florida, died peacefully on November 10, 2021 at the Bailey Family Center for Caring in St. Augustine of complications from Alzheimer. She was born in Wilmington, Delaware and spent her early... View Obituary & Service Information

The family of Janet Ann Collins created this Life Tributes page to make it easy to share your memories.