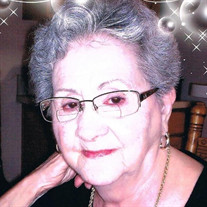 Jane Deloras Robinson Niemeyer passed away on January 7, 2021, in Deland, Florida, at the age of 93. She was born on August 4, 1927, to Ralph Elmer and Ida Louise (Tatro) Robinson in Chicago, Illinois. Jane grew up in Chicago during the Great Depression where she attended Our Lady of Sorrows Catholic School. During World War II, she worked at Vaughan's Manufacturing assembling bombs for the war effort. In 1947, Jane was working at Zenith Radio Corp. in Chicago when she met her husband-to-be, Robert F. Niemeyer. After a short courtship, Jane and Bob married on May 20, 1947, and over the next 16 years had eight children—at least one born on every U.S. coast. Jane was raised in a musical family, and she developed a long-lasting love for bluegrass music. It was not until later in life that she took up playing the 5-string banjo, followed by the harmonica. During the toughest times, Jane could turn to her music for comfort. Jane is survived by her children, Marybeth (Bill) McKendrick, Donna (Paul) Studstill, Debra (Hugh) Harling, Alice (Hugo) Nicolai, Robin (Zsolt) Hormay, Mark Niemeyer, Robert (Margie) Niemeyer; and several generations of grandchildren – 41 in all. She was preceded in death by her husband who passed away in 2018 after more than 70 years of marriage, her parents, her sister, Loretta Lakin, and her daughter Kathryn Fung who passed away in 2013. Interment will be held at the Jacksonville National Cemetery, where Jane will be laid to rest next to her husband. Jane's family would like to thank the nurses and staff at Villa Health & Rehabilitation for the care and compassion shown to her during the last two years of her life. St. Johns Family Funeral Home is in charge of arrangements.

Jane Deloras Robinson Niemeyer passed away on January 7, 2021, in Deland, Florida, at the age of 93. She was born on August 4, 1927, to Ralph Elmer and Ida Louise (Tatro) Robinson in Chicago, Illinois. Jane grew up in Chicago during the Great... View Obituary & Service Information

The family of Jane Deloras Robinson Niemeyer created this Life Tributes page to make it easy to share your memories.

Send flowers to the Niemeyer family.