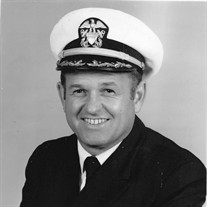 It is with great sadness that the family of Capt.James Francis Wetzel, USN, Ret. announces his passing on June 8 2021. Jim was born in October 1932 in Zap, North Dakota to parents, Harry Elmer Wetzel and Francis Willard Werner Wetzel. He had three brothers, Dale, Donald, and Robert. James, who went by Jim, graduated from Zap High School and went on to Jamestown College where he met his wife Janice Elaine Ecker. Jim was an intelligent, educated, and funny man. He was a friend to everyone he met. He rose from the coal mines of North Dakota to have 3 wonderful careers. Jim joined the United States Navy in 1953 during the Korean War. He started his carreer in Pensacola, FL, where he attended flight school. He went on to Corpus Christi where he learned to fly seaplanes. It was here Jim earned his wings! Jim proudly served his country for 28 years. During his time in the military, he earned a Master’s of Science and Administration from George Washington University. Jim’s final tour of duty was as the commanding officer of the Naval ROTC at Jacksonville University. After retiring from the Navy, Jim ran the office of the legal firm Smith Halsey and Nichols in downtown Jacksonville. Jim finished his working career as the Vice President of Operations and Real Estate Acquisitions with Barnett Bank of Jacksonville. He retired from Barnett and managed the 18 Story Barnett tower on 112 West Adams until such time the owners in New York sold the building. Jim married Jan in October 1955. They were happily married for 46 years until her passing in 2001. Jim was a proud member of The Meninak Club of Jacksonville for many years. Jim and Jan were faithful members of Christ United Methodist Church, where they raised their family and participated in many church committees and groups. Their church family life was important to them. Jim and Jan had three children and were “parents” to many family pets throughout the years. He was a loving father, grandfather, great-grandfather, uncle, and friend. Jim was affectionately known to everyone as “Papa”. Jim enjoyed camping, as he traveled the United States, often bringing his grandchildren. He coached his children’s ball teams. He helped with the church youth group. All of the kids in the neighborhood had his famous buttermilk pancakes. Sometimes, when the boys were all eating breakfast he would be in the kitchen for hours flipping pancakes! Jim was an avid astronomer and loved sharing his knowledge of the stars with his kids and grands. Jim will be welcomed into heaven by his beautiful wife Jan and their son Jeffrey (Hoss). Jim is lovingly remembered by his brother Donald Wetzel, his daughter Jennifer Wall and husband Kerry, son Jerry Wetzel and wife Virginia, as well as his three grandchildren Kathryn Clark, Jordan Arnold, and Jessica Kenton, great-grandchild Spencer Kenton and many nieces and nephews. A memorial service with Florida outdoor casual dress (wear your patriotic colors) will be held at Christ United Methodist Church at 400 Penman Road at 4 pm on 06/26/2021. Immediately following the service, the family will be greeting friends and relatives with a reception at the Wetzel Family home at 1821 Indian Woods Drive, Neptune Beach, FL 32266. Food and drinks will be served. All are invited to come. Jim did it his way! St. Johns Family Funeral Home is in charge of arrangements.

It is with great sadness that the family of Capt.James Francis Wetzel, USN, Ret. announces his passing on June 8 2021. Jim was born in October 1932 in Zap, North Dakota to parents, Harry Elmer Wetzel and Francis Willard Werner Wetzel. He had... View Obituary & Service Information

The family of James Francis Wetzel created this Life Tributes page to make it easy to share your memories.

It is with great sadness that the family of Capt.James Francis...

Send flowers to the Wetzel family.