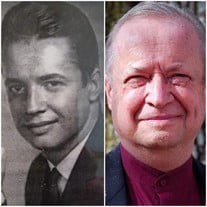 James Bozeman Kimbrough Jr. “Jim“ or “Jimbo”, age 81, passed away on Tuesday, August 10th, 2021 in St. Augustine, Florida. Jim was born in Greenwood, Mississippi where he attended Clarksdale High School, class of 1959. He also attended Hinds Junior College in Jackson, Mississippi for Business Administration and Northern Virginia Community College for Computer Programing and System Design. Jim moved to Virginia where he had three sons, Bo, John, and Chris, with his then-wife, Barbara Kimbrough. While living in Virginia, Jim served six years in the National Guard as a Staff Sergeant and worked for almost thirty years in the banking industry, finishing as a Senior Vice President with PNC Bank. When he retired, Jim moved to Florida with his partner, Verba, where he became a St. Augustine trolly tour guide. Being an extremely charismatic and fun-loving guy, he received recognition on multiple occasions for his presentation and delivery of historical knowledge about the city and area. Jim is preceded in death by his brother Riley Sheley Kimbrough and his son, John David Kimbrough; he is survived by his sons James Bozeman Kimbrough III and Christopher Daniel Kimbrough; his partner Verba Guard, her son Phillip Guard, her daughter Janna Guard Ramsey, and many wonderful grandchildren Funeral Services will be held at Evergreen Cemetery, in St. Augustine Florida, on Tuesday, October 5th, at 11 am.

The family of James Bozeman Kimbrough Jr. created this Life Tributes page to make it easy to share your memories.