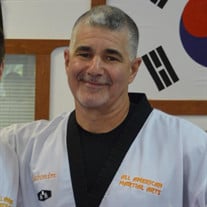 James Laurent Niland, III better known as "Jim" or "Karate Jim", 57, of St. Augustine, Florida, passed away on February 22, 2022, at Orange Park Medical Center after succumbing to injuries sustained in a car accident on February 20, 2022. Jim was born in Meriden, Connecticut on the 22nd of June in 1964 to James Laurent Niland, Jr. and Judith Niland. He attended schools in Meriden and graduated from Platt High School in 1983. Jim served seven years in the United States Army before becoming a Lineman for both Connecticut Light & Power and Florida Power & Light. After working for more than 20 years with the power companies and becoming a Safety Supervisor for FPL, Jim began to focus on a new career and started working towards becoming a Police Officer, a lifelong dream of his. Jim graduated from St. Johns River State Criminal Justice Academy and began work as an overnight patrol officer with the Duval County School Board Police Department. After two years as a police officer, Jim shifted his focus to his real passion and began working on opening his business All American Martial Arts in St. Augustine where for over the past 10 years he worked to build an amazing martial arts community. His positive influence is evident in the confidence instilled in his students. Jim knew how to have fun and rarely let a moment pass without a laugh. After years as a bodybuilder and powerlifter, Jim achieved his 4th Degree Black Belt in Tae Kwon Do and his Black Belt in Krav Maga. He was an avid shooter and had recently taken up clay shooting. As a car enthusiast, Jim owned several fun vehicles throughout the years which were always meticulously maintained. He especially enjoyed walking his little dog, Molly, along the shores of Crescent Beach. Jim is survived by his parents, his son, James Laurent Niland IV, his daughter, MacKenzie Elizabeth Niland, his “sista-sista”, Camie (Peter) Niland-Poirier, his niece and nephews, as well as aunts, uncles and cousins. A Celebration of Life will be held Wednesday, March 9th, from 4:00 PM to 6:00PM EST at St Johns Family Funeral Home. For those unable to attend, you may watch a live stream of the service by clicking on this link https://iframe.dacast.com/b/156599/c/549019 St Johns Family Funeral Home & Crematory is in charge of the arrangements.

The family of James "Jim" Laurent Niland III created this Life Tributes page to make it easy to share your memories.

Send flowers to the Niland family.