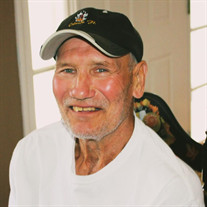 James Joseph “Chico” “Jim” Wlodarczyk, 72, St. Augustine, died January 14, 2022, at the Clyde E. Lassen State Veterans’ Nursing Home with his family at his side. He was born in Philadelphia, PA, son of the late Theodore and Adele Wlodarczyk. He grew up in the Port Richmond neighborhood with 5 brothers (Sonny, Ed, Fran (deceased), Ron, and Tom) and 4 sisters (Sis, Cecilia, Marie, and Rene). Chico loved baseball and basketball, playing as a youngster and later coaching, umpiring, and officiating. In his free time, he enjoyed word puzzles, spending time with family and friends, and especially vacationing at the beach. He was an occasional mischief-maker and light-hearted joker who loved laughing. As a young man, Chico served two years in the United States Army in Vietnam. He continued his government service with the Department of Defense, where he worked as a rigger until his retirement in 2012. Graveside memorial services with military honors will be held 11:00 a.m. Tuesday March 15, 2022, at Jacksonville National Cemetery. Flowers are declined, and those wishing may contribute in his memory to Friends of Lassen, c/o Sharon Buquo, 151 Straw Pond Way, St. Augustine, FL 32092. He is survived by his wife of 45 years, Rosemary Cole Wlodarczyk, St. Augustine; daughter, Erin Kate Storey (Timothy), Ft. Worth, TX; son, Jason Cole Wlodarczyk, Jacksonville; three grandchildren, Ryan Elizabeth, Anna, and William. He was a loving uncle to his many nieces and nephews, the most loving father, and a friend to all. Chico had the biggest heart, and he will be greatly missed. St. Johns Family Funeral Home is in charge of arrangements

The family of James "Jim" "Chico" Joseph Wlodarczyk created this Life Tributes page to make it easy to share your memories.

Send flowers to the Wlodarczyk family.