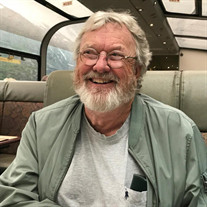 James Daniel “Jim” Flanagan, age 68, of St. Augustine, passed away suddenly at his home on August 4, 2021. Jim was born on August 24, 1952 in Jacksonville, Florida to Peter Jack and Edna Bowen and was a 1970 graduate of Andrew Jackson High School. From an early age, Jim knew that he wanted to be a professional artist and his dream job was working for Disney. A talented artist, he developed his skills and spent the rest of his life fulfilling his dreams. For many years, Jim worked as a graphic artist, beginning his career with the Jacksonville Library where he designed a huge paper mâché giant for the library’s “Take a Giant Leap into Reading” campaign. He started an entry level job with Walt Disney World in 1976 and was quickly recognized for his creative aptitude. Promoted to management, Jim spent time with Disney in California helping develop the Epcot brand. As Manager of Marketing Art, he created many of the logos and typefaces still used in Disney properties today. Jim met Sarah, a fellow employee at Disney, and they married in February of 1995. She will always be his biggest fan. Jim went on to continue his career at the Wooldridge Group and later founded his own company, Creative Du Jour, which he successfully operated until his retirement in December of 2014. After retiring, Jim moved to New Smyrna Beach where he lived for 4 years until he and his wife, Sarah, moved to St. Augustine. He has been a resident of St. Augustine for the past 3 years. Jim was creative in many ways. In addition to his graphic works, Jim loved the Beatles (especially John Lennon), Superman, the Wizard of Oz, and most of all his family. He loved comic books, movies, telling stories (after 18 years at Disney, he had some good ones), and a good Bloody Mary. He was a man of God who always put other peoples’ needs and wants above his own, and no one knew how to worship better than him. He taught us how to read, how to write so it looks like the comics, how to draw, and how being cool was all about embracing what you love even when others think it is weird. In other words, he taught us how to be our true selves. But more importantly, he showed us through his everyday actions how to be kind, how to be patient, how to take responsibility, how to take care of others, that your life is how you make it, how to have fun, how to persevere, how to have hope, how to believe, and that magic is real (you just have to make it). Our Daddy, Husband, Brother, Friend, he loved us without question. And that is how we knew that we were worth something. 1 Corinthians 13:4-8 He was preceded in death by parents Peter Jack and Edna Flanagan and sister Donna Gibson. He is survived by his wife, Sarah Flanagan of St. Augustine; daughters, Ashley Flanagan Giroud (Benny) of Miami, Michele Flanagan of Anchorage, AK, Danni Flanagan Reedy (Jacob) of Jacksonville, FL and Meagan Boals of Charleston, S.C.; sisters, Kathleen Mayberry (Tom) of Orange, MA. and Rose Wright of Jacksonville, FL. and a brother, Timothy Flanagan of Jacksonville, FL. On Tuesday, August 24, 2021, which would have been his 69th birthday, at 5:00 pm please join us and raise a glass to him. Service will be held at a later date. St. Johns Family Funeral Home is in charge of arrangements.

The family of James Daniel "Jim" Flanagan created this Life Tributes page to make it easy to share your memories.

Send flowers to the Flanagan family.