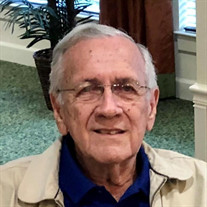 Jack Herbert “Herb” Silber, age 78, of Gainesville, Florida, passed away January 18, 2021 at Harbor Chase of Gainesville with his family by his side. Born on August 19, 1942 to Jack Silber and Mary Jane Silber (Mills) in High Springs, Florida, Herb graduated from Berry School for Boys in Rome, GA. He met the love of his life, Linda Register, while in 9th grade at Santa Fe High School, and married her on September 20, 1964. Herb and Linda began their married life in Merritt Island, Florida. They bought their first home in Titusville in 1965, which is where he resided and raised a family till 1998. Herb started his career working at the Kennedy Space Center during the 1960’s with Pan Am, and held various positions in logistics, Central Supply, and mission support until his retirement from EG&G in 1997, after more than 30 years of service. During his career Herb faithfully served his country working on all of NASA’s major programs, Gemini, Apollo, Sky Lab, Space Shuttle, and the International Space Station. Herb took great pride in being a part of our nation’s space program and the successes of NASA and our nation. Herb was the kind of guy who never met a stranger and he LOVED to talk! Talking to one of his many friends was his favorite way to pass the time. Herb was well known and very active in the community. He was a longtime member of the Jaycees and Chaired the Cris Collinsworth Charitable Golf Tournament in Titusville and was a long-term member of Florida Citrus Sports where he served on the Bowl Selection Committee and volunteered for many events. There are few who could be considered a bigger fan of the Florida Gators than Herb was. He was a Gator fanatic! Herb was a “Bull Gator” and a season ticket holder for 49 years and enjoyed traveling the country to see the Gators play. Nothing was more important in life to Herb than his family and friends. He was a loving and supportive son, husband, father, grandfather, great grandfather, uncle, father-in-law, and a friend to many. He was always involved in the lives of his daughters and was the biggest cheerleader at their swim meets and golf meets. He enjoyed playing golf, working around the house and traveling the world with Linda. His retirement years were spent between their Oak Hill and Gainesville homes and, as always, Herb made time for friends, meeting every Friday with his “lunch buddies”, which they called The Eastside Garden Club. He will be deeply missed. He is survived by his wife of 56 years, Linda Silber of Gainesville, daughters, Lisa Silber Hoffman (Dana) of Dallas, GA, Jacqueline Silber Nemeth (Brian) of Gainesville, grandchildren, Aaron Hoffman (Kirsten) of Marietta, GA, Lindsay Hoffman of Atlanta, GA, Drew Nemeth, Alex Nemeth, and Landon Nemeth, all Gainesville, FL.; and great granddaughters, Ada Grace Hoffman and Nora James Hoffman, and sister, Celia Silber Gardner (Jan) Dunwoody, GA. Because of the COVID restrictions, a Celebration of Herb’s Life will be held at a later date. St. Johns Family Funeral Home in St. Augustine is in charge of arrangements.

The family of Jack Herbert "Herb" Silber created this Life Tributes page to make it easy to share your memories.

Send flowers to the Silber family.