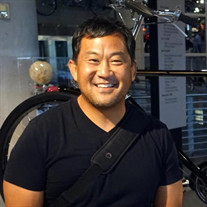 Han/Hyun Tak, beloved father, son, brother, uncle, nephew, cousin passed away May 29th, 2022, at St. Augustine, Florida at the age of 48. He was born in Seoul, Korea to Seung Won Tak and Soon Ok Whang on April 7, 1974. He grew up in West Hartford, CT and graduated from William H. Hall High School. Han completed his undergraduate studies at Hobart William Smith Colleges where he received his Bachelors in 1997. Han was active in various intermural sports and spent a semester abroad at Yonsei University. He has worked at various companies such as Oracle, LexisNexis, and IBM before pursuing his passion to build his own career and business, Life Multimedia. Han’s passions in and for life was immense and large. He loved to invest in everyone he met, and his career was built around those relationships with the intent to be a storyteller. His dedication to his business as a Content Strategist and Corporate Storyteller included prominent businesses in and around St. Augustine, FL. These business relationships turned into his extended families that included Nimnicht Chevrolet, Caps on the Water, Sunset Grill, Ginger-Bistro, and so many more. Growing up and throughout his entire life, Han found joy when he was outdoors in the sun actively working out. His earliest passion that lasted throughout his life, was tennis and photography, both of which he taught himself. Growing up, you would often find Han hitting tennis balls at his local elementary school, perfecting his strokes and serves. No matter where he was, Han would always find a local tennis court early in the morning to pick up a game with fellow players he might have never met before. His more recent passions as an adult, included motorcycling and road cycling. He has been described as a friend that puts his whole heart into everyone and everything he does. Han lived his life with full joy and passion, never letting a day be wasted. Han’s goal in life was to raise his son, Ethan, to be the best person he could be. Ethan and his family was everything to him. He would take every opportunity to boast about how proud he was of Ethan and how amazing Ethan’s talent for golf was developing. Han is survived by his most beloved son, Ethan, co-parent, Kye Chung; parents, Seung Won Tak and Soon Ok Whang; three sisters, Susy Tak, Cathy Chung (Kyoung, Andrew, and Christian), and Nancy Yeung (Tom, Emily, and Abby); He also leaves behind his uncles and aunts, Seung Jin Tak, Seung Hwa Tak, Jung Hae Tak, Dr. Pill Joon Whang, and Tack Joon Whang. He also leaves his cousins, Anne Kelly (Steve), Jane Park (David, Elsie, and Ian), Brian Tak, David Tak, Cindy Tak, Jung Won Park, Hyun Park, Sam Park, Dr. George and Lisa Whang, Dr. Walter and Debbie Whang, Joseph and Marie Whang, Dr John and Audrey Jensen, Juho Whang and John Whang. The family would like to thank all those that have reached out with kind words and support. We are deeply touched and so incredibly thankful for all of Han’s Floridian friends who were his family here. The viewing service will be held at St. John’s Funeral Home on Wednesday, June 1st at 5:00-7:00 pm. Funeral services will be held at the same location on Thursday, June 2nd at 11:00am. All are invited to attend. The Family would like to extend their thanks and also an invitation to Sunset Grille 421 A1A Beach Blvd, St. Augustine following the funeral service. Covid-19 safety protocols will be in effect. For those unable to attend, you may watch a live stream by clicking on this link St Johns Family Funeral Home & Crematory is in charge of arrangements.

Han/Hyun Tak, beloved father, son, brother, uncle, nephew, cousin passed away May 29th, 2022, at St. Augustine, Florida at the age of 48. He was born in Seoul, Korea to Seung Won Tak and Soon Ok Whang on April 7, 1974. He grew up in West Hartford,... View Obituary & Service Information

The family of Hyun Suk Tak created this Life Tributes page to make it easy to share your memories.

Send flowers to the Tak family.