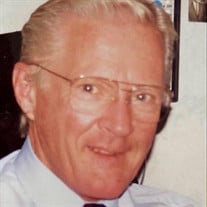 Henry L. Bromirski, age 97, of Palm Coast, passed away peacefully on April 20, 2022, at Tuscan Gardens in Palm Coast. Henry was born to Bernard and Bernice (Lewandowski) Bromirski on April 19, 1925 in St. Louis, Missouri. He graduated from San Francisco State College and joined the U.S. Navy at the beginning of WWII, training at Naval Station Great Lakes on Lake Michigan. Henry served in the Pacific Theater during war and reached the rank of Yeoman 1st Class. He was honorably discharged at New Orleans, LA. in 1946. A devout catholic, Henry spent 51 years as general manager of the Mission Nombre de Dios National Shrine in St. Augustine. During this time, Henry established a successful religious supply company based in St. Augustine that supplied churches across the eastern U.S. with religious supplies for services. He was a longtime member of St. Anastasia Catholic Church. He enjoyed golf and tennis for much of his life. Henry was preceded in death by his parents, Bernard and Bernice Bromirski, his son, Henry “Hank’ Bromirski, Jr. in 2002, and his beloved wife, Barbara M. Bromirski in 2021. He is survived by his daughter, Signe A. Cutrone and her husband Luke Cutrone Sr. of Lafayette, LA; his son, John H. Bromirski of St. Augustine, FL.; and grandchildren, Jason Eric Bromirski of Gainesville, FL., April and Aaron M. Bromirski, both of St. Augustine, and Luke, Christopher and Tiffany Cutrone of Lafayette, La. A memorial mass with military honors will be held 9 am on Tuesday, April 26, 2022 at St. Anastasia Catholic Church with Rev. Timothy Lindenfelser, Pastor, officiating. Inurnment will immediately follow the service. St. Johns Family Funeral Home is in charge of arrangements.

Henry L. Bromirski, age 97, of Palm Coast, passed away peacefully on April 20, 2022, at Tuscan Gardens in Palm Coast. Henry was born to Bernard and Bernice (Lewandowski) Bromirski on April 19, 1925 in St. Louis, Missouri. He graduated from... View Obituary & Service Information

The family of Henry L. Bromirski created this Life Tributes page to make it easy to share your memories.

Send flowers to the Bromirski family.