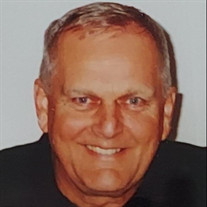 Harold Douglas “Doug” Harmon, Jr., age 80, of St. Augustine, passed away peacefully on March 30, 2022, at his home with his family by his side. He was born to Harold Douglas Sr. and Vida (Carruth) Harmon, on October 27, 1941 in Bennington, Vermont and he grew up in Ludlow, Vermont. He proudly served his country in the US Navy for 4 years. His time in the Navy brought him to Maryland, where several years later he met the love of his life, Gwen Browning in Laurel, Maryland. Doug and Gwen were married on February 27, 1971. A short time later Doug’s job with GE brought them to Ft. Lauderdale, FL where they lived for 30 years. Doug went on to work for McDonalds Electrical Supply Company for more than 20 years, retiring in 1996. In 2001 Doug and Gwen made their move to St. Augustine, FL where Doug loved the more laid-back life. It didn’t take long for him to get involved with the beauty of St. Augustine, volunteering at the base of the Lighthouse for several years and working for the City of St. Augustine Beach at the beach entrance toll booths. Doug was a gifted athlete from a young age and had a lifelong love of sports. As a young boy he was hardly ever without a baseball bat and ball in his hands, playing wherever he and friends could find room to throw and hit a baseball, often through a neighbor’s window. As a young teen he also developed a love for fishing, spending many hours fishing in brooks near his home. In his high school years Doug excelled in both baseball and basketball. During his Navy days, a friend introduced him to golf and Doug eventually became an avid golfer. During the past 10 years Doug was a member of the St. Augustine Shores Golf Club, playing 3 times a week on the Monday, Wednesday, Friday Men’s Golf Leagues. What thrilled him the most was during COVID and virtual school, his grandson was able to play on the golf leagues with him and developed his own love of the game. More than anything Doug loved his family and enjoyed spending time with them, but nothing compared to the love he had for his grandchildren! He was loved by many, and he will be deeply missed! He is survived by his wife, Gwen of St. Augustine, FL; son Brian Scott Harmon of Laurel, MD; daughter, Tara Lynne Nelson (Joseph Nelson) of St. Augustine, FL; grandchildren, Kaden Abraham Nelson, Cole Thomas Nelson, Cali Lynne Nelson, all of St. Augustine, FL; sister, Diann Harmon of Ormond Beach, FL; sister-n-law, Pamela Rau of St. Augustine, FL; brother-n-law, Stew Browning (Debbie) of California, MD; and many extended family members and close friends. A Celebration of Life Memorial Service will be held at 12:00pm on Friday, April 22, 2022, at the St. Augustine Shores Golf & Country Club with Pastor Walter West officiating. Golf attire or casual dress is appropriate. Those unable to attend can view the service live streamed at https://iframe.dacast.com/live/2a7a09ae1c0559a83ef537e05e6a14a6/2aae7d5f-98fd-a9e6-32a7-b774547cf42c In lieu of flowers, donations can be made to the Pedro Menendez Boy’s Golf Team and sent c/o Tara Nelson at 747 Lina Ct. St. Augustine, FL 32086. Doug’s family would like to encourage you to sign up for organ donation by going to OrganDonor.gov. The unselfish act of organ donation gave Doug almost 14 years of watching his family grow. St. Johns Family Funeral Home is in charge of the arrangements.

The family of Harold Douglas Harmon Jr. created this Life Tributes page to make it easy to share your memories.

Send flowers to the Harmon family.