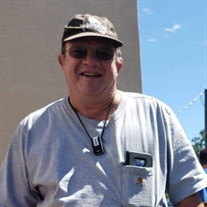 Gordon Robert Gaines, 59, of St Augustine passed away Sunday, December 13, 2020 at his residence. Gordon was survived by his loving wife of 27 years Marcia Kay Keating Gaines; 8 children, Melinda Thirwall (Josh), Amanda Woody (Charlie), Greg Gaines (Sandra), Donald Shugart Jr., Jonathan Shugart (Heather), Melissa Keating (Alvin), Richard Keating III, Heather Lynn Keatin the fourth-Grotz (Brent “Fred”); sisters Janet Gaines Riera-Gomez (Orlando), Frances Sewell (Kenny);17 grandchildren, 1 great grandchild and many nieces and nephews. He was preceded in death by his parents, George and Kate Gaines and his best friend, Donald Shugart Sr. Gordon was born July 15, 1961 in Miami-Dade County. He worked for the Florida Park service for many years while living in Miami. Later in life, at the age of 31, he relocated to St. Augustine to work for Anastasia State Park where He met the love of his life and future wife. Gordon was a loving husband, father, grandfather and great grandfather. He was an avid outdoorsmen, survivalist and marksman. His hobbies included Cane fighting, wood burning and traditional wood carving. He also enjoyed teaching his family gun safety. He cared so much for his family he would also do things he didn’t enjoy such as fishing and Disney World. Gordon loved his country and was extremely patriotic. He lived a very adventurous, exciting life and will be missed by so many that loved him. In lieu of flowers donation can be sent to the funeral home to assist with Gordon’s funeral expenses. St. Johns Family Funeral Home is in charge of arrangements.

The family of Gordon Robert Gaines created this Life Tributes page to make it easy to share your memories.