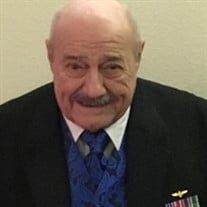 We are deeply saddened by the death of loving husband, father and friend Jerry Hunt. Age 84. He was an extraordinary life force, God loving, determined, generous, gentle and kind. Jerry began life in Detroit, Michigan, son of Mina (Robertson) and Arthur Hunt. He left grade school early to work as a carpenter with his stepfather, James DuBay. Shortly after, he enlisted in the USMC, serving our country for 21 years with two tours of duty in Vietnam as an F8 pilot. During his time in the Marines, he earned a GED, BS degree from Marquette Univ. and a MS degree from the US Naval Post Graduate School. In May of 1982 he earned a PHD in Mathematics from the University of Michigan. His civilian career, post military, began at Hughes Aircraft, ending with retirement as an Engineering Project Manager at DARPA. He loved travel, Ketel One martini’s, family and many lifelong friends. He was preceded in death by both parents, stepfather, sister Peggy Ann Slayton and husband John. He leaves behind wife Linda, son Randall (Lynn), daughters Sherri Rome (Zane), Susan Joakim (John), stepdaughter Christina Smith (Roger), several grandchildren and great grandchildren. A mass will be celebrated, Monday, May 9th, 11:00 am at St. Anastasia Catholic Church, St. Augustine, Fl

The family of Gerald Hunt created this Life Tributes page to make it easy to share your memories.

We are deeply saddened by the death of loving husband, father...

Send flowers to the Hunt family.