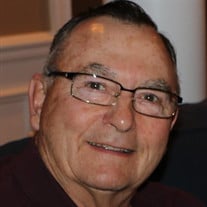 George D. Haislip, age 77, of Elkton, passed away unexpectedly on February 8, 2021 at his home, with his wife by his side. Born and raised in Detroit, Michigan, George graduated from Denby High School with the Class of 1961. George was an accomplish athlete and played Tackle on the football team while at Denby High. He was a member of the state championship team during his senior year, and earned “All City”, All State”, “All American” honors, sharing the latter award with football greats Dick Butkus and Gale Sayers. He went on to Michigan State University on a football scholarship and continued his football career as a MSU Spartan. His most notable achievement at MSU however, was meeting the love of his life, Patricia Peace, and marrying her during his junior year. They began married life in Livonia, Michigan, where George taught Physical Education and Driver’s Ed. in Oak Park, Michigan while earning a Masters Degree in Business at Eastern Michigan University. In 1975, George transitioned from teaching to a career in sales. He began working as a District Sales Manager for General Motors in Little Rock, Arkansas, and later moved to positions in New Orleans, Louisiana, and Washington, D.C. before returning to Rochester Hills, Michigan with GM. He retired to Jacksonville, FL in 1999 and had been a resident of the Coquina Crossing community in St. Augustine. From an early age, George developed a love for horses and harness horse racing. It became a lifelong hobby for him that he shared with his father and daughter. He also remained an avid Spartan fan and rarely missed an opportunity to watch them compete. He stayed active in the community volunteering at the Flagler Hospital Wellness Center. George knew no stranger and relished the friends he made through his volunteering. More than anything, George was a devoted husband, father, grandfather, and friend to many and will be deeply missed. He is survived by his wife of 56 years, Patricia “Pat” Haislip of Elkton; sons, Kyle Haislip of Morgantown, WV, and Andrew “Andy” Haislip, and his wife, Stephanie, of Connelly Springs, NC; daughters, Chrissy Daniel, and her husband, Mark, of St. Augustine, Mary Marshall and husband Joe Steilberg of Georgetown, KY and grandchildren, Cassidy Lopez, Margaret, Mckenna, and Brady. He was preceded in death by his brother, James Haislip. A memorial service will be held at 11:00 a.m., on April 17, 2021 at St. Johns Family Funeral Home, with Pastor J.R. Deetz officiating. In lieu of flowers, donations in George’s memory can be made to: Standardbred Retirement Foundation, 42 Arneytown-Hornerstown Rd., Cream Ridge, NJ 08514. https://www.adoptahorse.org/. For those who are unable to attend, the service will be live streamed at https://iframe.dacast.com/b/156599/c/549019. St. Johns Family Funeral Home is in charge of arrangements.

George D. Haislip, age 77, of Elkton, passed away unexpectedly on February 8, 2021 at his home, with his wife by his side. Born and raised in Detroit, Michigan, George graduated from Denby High School with the Class of 1961. George was an accomplish... View Obituary & Service Information

The family of George D. Haislip created this Life Tributes page to make it easy to share your memories.

Send flowers to the Haislip family.