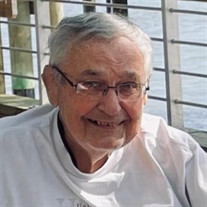 Gary Flack, 82, of St. Augustine, FL, passed away on Monday June 6, 2022 following a long, courageous battle with kidney failure and heart disease. Gary was born on July 27, 1939 to Benjamin Patrick “Pat” Flack, Jr. and Eileen Gertrude Flack (Donovan) in Osage, Iowa. Gary graduated in 1961 from the United States Military Academy in West Point, NY. He had a distinguished career as an officer in the United States Army (Armor) serving two tours in Vietnam, postings in Germany and South Korea along with numerous assignments in the U.S. He retired in 1983 as a Lieutenant Colonel. Among his many honors, Gary was twice awarded the Bronze Star. After retirement, Gary worked as an Independent Contractor in Saudi Arabia for 7 years, The Job Corps in Flint and Detroit, Michigan, followed by assignments in various parts of our country and the Middle East until putting everything aside and relaxing in St. Augustine with his wife and dogs. He was an avid golfer and enjoyed meeting new people as he played different courses around the country and abroad. Gary seldom left a place without having made new friends Gary is survived by his wife, Eloise Flack (Recupido); two sons, Sean (Stephanie) and Bary (Tina); and Nikki Holm (Michael) who he loved and considered his daughter. In addition he leaves behind 7 grandchildren that were his world: Emily, Shannon and Braydon Flack; Shaelyn, Chris, Caitlyn and Emilia Holm; and one loving brother, Elon (Jane), as well as many nieces and nephews. Gary was preceded in death by his parents, his former wife Tina Flack (Denney), his brothers Fred Flack and Mike Flack and his sister Cathy Johanns (Flack). After graduating from West Point; Duty, Honor, Country, continued to be his motto. He was a man of faith who sought God’s will, with a great love for family. Gary was loved by all and will be greatly missed. A full military honors funeral service will be scheduled at a later date with interment at Arlington National Cemetery.

The family of Gary Lee Flack created this Life Tributes page to make it easy to share your memories.

Send flowers to the Flack family.