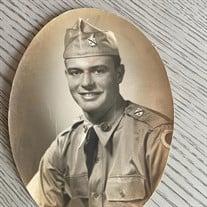 Frederick Robert McDonald (Bob) passed away peacefully on December 17, 2021. Bob arrived on our beautiful blue planet August 11,1932. He was the happy union of Frederick McDonald and Maratana Granata McDonald. His earliest years were spent in Englewood New Jersey and Barranquilla, Colombia where Spanish became his first language (a language that remained with him until his passing). As a child and young adult Bobby had a brilliant, inquisitive, scientific mind. He was a self-taught welder, archer, photographer, and marksman and he was forever finding mischief with his creations. The most memorable of these ventures was a unique car he built when he was 17 years old. He welded together a car body, fitted it with an engine, and for his final touch he devised a small functional cannon and attached it to the top of the car! He took it to out-of-the-way places, where he could harm no one, and fired out cannon balls. The police eventually arrived, scolded him, and confiscated the cannon! Likely it was the talk for quite some time. Bob pursued his interest in photography by attending a photography school in New York City. While in high school he became the school photographer and in his spare time made rounds to local real estate offices offering his skills for photos of homes. Later, this entrepreneurial spirit would manifest during his years in military service. Bob served his country in the U.S. Army during the Korean War. His marksmanship skills were honed there, where he became a top marksman. His photography skills were also utilized there, where he was used to document a variety of events of the war. He did such great work that all his army buddies and superiors happily paid him to make photographs of themselves for family back home. Bob took thousands of such photographs that lifted spirits and likely live on in albums and mantels around our country. After his Honorable Discharge Bob met his future wife Joan Grace Hoffman McDonald. They married in New Jersey, honeymooned in St. Augustine, Florida and never left. Bob bought a small home and built an upstairs by himself. Even more remarkably, he added a feature with which many St. Augustine residents are familiar. Bob found a unique and experimental idea for building a swimming pool in a Popular Science magazine. Some told him the idea would never work but that did not stop Bob. After work, every day, using a hand shovel, he dug out the entire pool. It took him one year! It is lined with layers of tarpaper and fed by a 400 ft. artesian well. The pool measures 60’ x 30’ and is 10’ deep at one end and 5’ at the other and has a fountain that once sprayed water 10’ into the air. The pool is in existence to this day and is a place of happy memories for all the neighborhood children and many other people who have enjoyed the fresh, cool waters on a hot Florida day. Bob’s quiet and gentle nature will be remembered with great affection by all his family. His grandchildren have fond memories of their grandfather’s enjoyment of the natural world. He loved his trees (please don’t even trim a branch) and his beloved and mischievous raccoon, Chiquita, whose progeny he faithfully fed for decades. Most of all he will be remembered for his perpetual smile and positive nature that will brighten the hearts of those who knew and loved him. Bob leaves behind his wife, Joan McDonald, a son, Robert Joseph McDonald and daughter in law Susan McDonald, daughter Patricia Ann Santas and son in law, Ari Santas, six grandchildren, Shannon McDonald, Caitlin McDonald, Grant McDonald, Alethea Searcy and spouse Iain Searcy, Michael Santas and spouse Casey Carter Santas, Aris Santas and partner of many years Kelly Dodd, and four great grandchildren, Aleph Anderson, Augustus Santas, Audrey Santas and Orion Searcy. Bob will be sorely missed, but we are grateful for his time on earth and for his peace and smile that will remain as a sunshine in our souls. In lieu of flowers the family requests donations in his memory be made to Community Hospice and Palliative Care, 4266 Sunbeam Road, Jacksonville, FL 32257 St Johns Family Funeral Home & Crematory is in charge of the arrangements.

The family of Frederick Robert McDonald created this Life Tributes page to make it easy to share your memories.

Send flowers to the McDonald family.