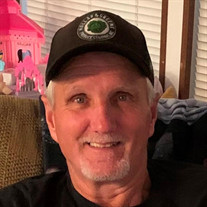 Freddy Martin, age 58, of St. Augustine, passed away on August 31, 2021 at Flagler Hospital. Born to William and Betty Martin on October 27, 1962 in Fayetteville North Carolina, Freddy was raised in Fayetteville, N.C., and moved to Saint Augustine at the age of 19. Following in the footsteps of his father, he trained to be a truck driver. Freddy enjoyed a long career as an over the road truck driver and worked for many different companies. Most of his career however was spent working for Hollar and Greene Produce Company where he worked for many years. He really loved his work, running up and down the east coast of the United States. First and foremost, Freddy was a devoted husband and family man. He loved his family with his whole heart and was a great provider. He will be remembered by many as the life of party. He was always up for a good prank and a good laugh. Everybody loved Freddy. He was an avid NASCAR fan and enjoyed working in his yard. A man who could fix anything, he was always there for others, helping his neighbors with any need. He was a collector of stuff, maybe even a bit of a hoarder. His motto was, “if its free, its for me”. More than anything, Freddy was a man of deep faith, often reading the Bible and was a believer in the Lord. He will be deeply missed by his family and friends. He was preceded in death by his father, Bill Martin and his grandparents, Macon and Julia Thrash. He is survived by his wife of 22 years, Rhonda Martin of St. Augustine; his daughters, Tiffany Pellicer (Tyler) of Hastings, Holly Martin of Jacksonville, N.C.; a son, Tyler Martin of St. Augustine; his mother, Betty Martin of Hope Mills, N.C.; a brother, Rocky Martin of Saint Augustine; his sister, Becky Locklear (Junior) of Hope Mills, N.C.; grandchildren, Taelyn and Tensley; his stepmother, Doris Martin of South Carolina, stepbrother, Ross Camerone of Saint Augustine, stepsiblings, Paula, Jeanne, James; and several nieces and nephews whom he loved very much. Services will be held at 11 am on Wednesday, September 8, 2021 at St. Johns Family Funeral Home. A visitation, beginning at 10 am will precede the service. Interment will follow at Craig Memorial Park. St. Johns Family Funeral Home is in charge of arrangements.

Freddy Martin, age 58, of St. Augustine, passed away on August 31, 2021 at Flagler Hospital. Born to William and Betty Martin on October 27, 1962 in Fayetteville North Carolina, Freddy was raised in Fayetteville, N.C., and moved to Saint Augustine... View Obituary & Service Information

The family of Freddy Martin created this Life Tributes page to make it easy to share your memories.

Freddy Martin, age 58, of St. Augustine, passed away on August...

Send flowers to the Martin family.