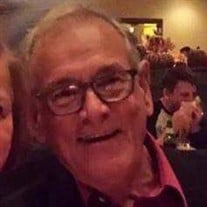 Frank James Battreal, Jr., age 81, of St. Augustine, passed away on January 5, 2021 at Baptist South in Jacksonville. He was born and raised in Potosi, Missouri to the late Frank and Bernice Battreal. After high school Frank proudly served our... View Obituary & Service Information

The family of Frank James Battreal Jr created this Life Tributes page to make it easy to share your memories.

Send flowers to the Battreal family.