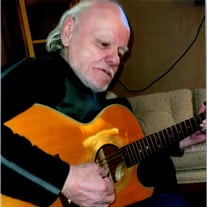 Floyd Griffin, age 72, of St. Augustine, Florida, passed away on August 16, 2021 at Baptist South in Jacksonville. He was born in Ludowici, GA to the late Jesse and Ottie Griffin and grew up in St. Augustine, Florida. Floyd worked for many years at St. Regis Paper Company as an equipment operator. He was very passionate about music. He played drums and guitar in a local band and they often played at the Moose Lodge. In his later years he was known as “Grandpa” to all children that knew him. He was a loving father, grandfather, brother and friend. He is survived by son, Floyd Griffin, Jr. (Salina); daughters, Sherry Biskner, Laurie Eva King (Kevin), Lisa Griffin Pendleton; brother, Wilbur Griffin (Rita); sister, Ruby Ford; grandchildren, Joseph, Christopher, Justin, Ashley, LJ, TJ, Jeffrey, Rosario, Meghan, Kyle, Amber, Anthony, Austin and 9 great grandchildren. He was preceded in death by brothers, Edward Griffin, Sr. and Robert Griffin and son in law, Jerry Biskner. A funeral service will be held at 12:00 pm on Wednesday, August 25, 2021 at St. Johns Family Funeral Home. A visitation will precede the service 11-12 for the public. Private family visitation will be held from 10-11 . Interment will follow at Craig Memorial Park. For those unable to attend services will be livestreamed via the following link: https://iframe.dacast.com/b/156599/c/549019 St. Johns Family Funeral Home and Crematory is in charge of the arrangements.

The family of Floyd Griffin created this Life Tributes page to make it easy to share your memories.

Send flowers to the Griffin family.