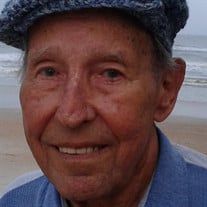 Reverend Erle Leslie Prevatt, age 89, of St. Augustine, passed away peacefully on July 25, 2021 at Flagler Hospital in St. Augustine with his wife by his side. Erle was born in Starke, Florida on June 6, 1932 to John and Emma Prevatt, the youngest of five children, and grew up on his family’s farm. At the age of 10 he escaped farm work and moved with his family to Jacksonville. He went to work at an early age doing a variety of jobs. He sold insurance for many years and worked for the City of Jacksonville in the motor pool for 20 years. He was called to the gospel ministry in the late 1960’s and began pastoring churches as a bi-vocational minister. He attended Candler Theological Seminary at Emory University, graduating in 1993. He pastored many churches in the NE Florida area, finally retiring after 45 years of service at the age of 80. He last pastored First United Methodist Church in Welaka. He was loved dearly by the congregations that he pastored and was a devoted family man—a loving, caring and supportive husband, father and grandfather. He prayed daily for his family. He was preceded in death by his wife of 43 years (1950-1993), Vennie Turner Prevatt, a son, Samuel H. Todd II, and a daughter, Barbara L. Smith. He is survived by his wife of over 26 years, Jo-An Ruth Prevatt of St. Augustine, son, Edwin L. Prevatt of Orange Park, daughter, Rita C. Prevatt – Judd (Robert) of Middleburg, son, Eugene Erle Prevatt (Lynn) of Middleburg, son, Donald Calvin Newman, Jr. (RaeAnne), stepson, Richard J. Starr (Viktoryia) of Clawson, Michigan, stepdaughter, Victoria J. Starr of Augusta, Maine, and numerous grandchildren, great grandchildren, and great great grandchildren. Funeral services will be held at 1 pm on Saturday, July 31, 2021 at St. Johns Family Funeral Home. A visitation, beginning at 12 noon will precede the service. Interment at Prevatt Cemetery in Starke will take place on Monday, August 2, 2021. In lieu of flowers, donations in Erle’s memory can be made to: Masonic Home Endowment Fund, the UMC Children's Home. Those unable to attend can view the service live streamed at https://iframe.dacast.com/b/156599/c/549019. St. Johns Family Funeral Home is in charge of arrangements.

Reverend Erle Leslie Prevatt, age 89, of St. Augustine, passed away peacefully on July 25, 2021 at Flagler Hospital in St. Augustine with his wife by his side. Erle was born in Starke, Florida on June 6, 1932 to John and Emma Prevatt, the youngest... View Obituary & Service Information

The family of Reverend Erle Leslie Prevatt created this Life Tributes page to make it easy to share your memories.

Send flowers to the Prevatt family.