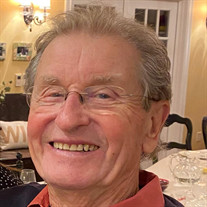 Edward “John” Dyson, age 85, of Skaneateles, NY, passed away on March 17, 2022 at Baptist South Hospital in Jacksonville, FL. following complications from a serious fall. He was born in Newcastle upon Tyne, England on January 24, 1937 and grew up in London and Great Yarmouth, England. He attended Aldenham School and went on to obtain a degree in mechanical engineering at the University of London. Early in his career he managed Erie Resistor’s operations in England and Wales before working for Plessey Capacitor in Edinburgh, Scotland. In 1977, Plessey transferred him to California to manage their operations in Westlake Village. In 1981 John took a sales position with Camvac/Dunmore and moved to Ridgefield, CT. He retired in 2009 and later moved to Skaneateles, NY. Here he took on new challenges, including producing tomato chutney from his grandmother’s coveted recipe naming it “Ma Poole’s” in her honor, ran Finger Lakes Driving Range and served as business manager for CNY Golfer. He enjoyed travelling around the world and spending winters in St. Augustine, Florida, with his wife, Katharine (“Kathie”) and was an avid golfer. He loved playing golf with the Syracuse Bandits, and was a member of the Skaneateles Country Club where is played in several leagues. John also had a passion for antique cars, especially British vehicles and loved talking “cars” with whomever shared this passion. In Florida in addition to golf, he enjoyed pickleball, fishing, walking on the beach and getting together with friends. And he never missed a day reading his favorite newspaper, “The London Telegraph” which downloaded daily to his Kindle. He had many friends and often shared stories with them about his life as a young boy growing up in London during World War II as well as other experiences. As one friend said, “He demonstrated an unbeatable sense of humor, an endless curiosity and a relentless and contagious optimism.” Another noted, “He was a gentleman, a gentle man, ever charming, ever interesting and always with a smile on his face as he shared his quiet humor and kind words.” He is survived by his wife of 30 years, Katharine “Kathie” Dyson; sons, William Dyson (Jane), James Dyson (Allison) and Henry Dyson (Kimberly); grandchildren: Kevin, Lauren, Caroline and Ian; stepsons, Douglas Pinckney (Georgina), Christopher Pinckney (Cathy) and Michael Pinckney (Jessica); step-grandchildren: Douglas III, Madison, Will, Charles, Noelle, Kaeden and Ryland; his brother Frank Dyson (Phoebe) of Gorleston, England and former wife, Margaret Dyson of Winchelsea Beach, England. He was preceded in death by his parents, Arthur and Edna Mary Dyson. In lieu of flowers, the family prefers donations to SAVES (Skaneateles, NY); Global Lyme Alliance; Boston Children’s Hospital; Opendore (Stonestoremuseum.org); American Heart Association; or a charity of your choice. A Celebration of Life will be scheduled for a later date. To send condolences visit St. John’s Family Funeral Home, St. Augustine, FL.

Edward &#8220;John&#8221; Dyson, age 85, of Skaneateles, NY, passed away on March 17, 2022 at Baptist South Hospital in Jacksonville, FL. following complications from a serious fall. He was born in Newcastle upon Tyne, England on January 24,... View Obituary & Service Information

The family of Edward John Dyson created this Life Tributes page to make it easy to share your memories.