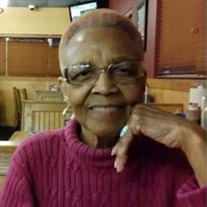 Dorothy Mae Lapsley Smith was born to Crayton and Ethel Sanders Lapsley in Uniontown, Alabama. She was the fifth of nine children. While she was young, Crayton moved his family to Gary, West Virginia. After losing her hearing at the age of 14, she attended the West Virgina School for the Colored and studied Cosmetology. Upon graduation, she attended Gallaudet College, now University, majoring in Education. Her motivation led her to be involved in various college activities. Her love of teaching brought her to St. Augustine, FL to teach at the Florida School for the Colored. EnRoute to Florida, she met the love of her life Twyman Smith. They married and to their union a child was born, Dorothy (Dottie) LaMarrion. Of all her accomplishments, becoming one of Jehovah’s Witnesses was her greatest joy. She dedicated her life to Jehovah in 1963 and after retiring from The Florida School for the Deaf and the Blind, became a full time Pioneer, teaching others about The Bible and her God, Jehovah. As each year passed, she would quote the scripture found in Psalms 90:10“Our Years Are Seventy or Eighty, If We Have Special Mightiness...” In addition to sharing her love of The Bible, Dorothy loved to read, cook, and sew, teaching those skills to her daughter. Her family was her joy and she cherished her last days surrounded by her Daughter, Grands and Great-Grands. In addition to her parents and her husband, she looks forward to seeing her Siblings, Lue Ethel, Sanford, Alfreeda, Abijah, and Berneice in the Resurrection. She leaves to cherish her memory, Daughter; Dottie L. Smith, Grandchildren; DiAndria (Jermaine) Zeigler, Marcus (Pamela) Gunter, Sr., Antwan (Mimi) Perry, and Derrick Williams, Great-Grandchildren; Nah’jha, Marcus, Jr., Marquez, Israeli, Jazmine (caretaker), Rachel, and Tania, Great-Great Grand; Hailey, Sister, Margurite Lapsley Muharib, Cleveland, Ohio, Brothers-in-law; Stonewall (Jerelene) Smith, Ralph (Betty) Smith, Orlando, Melvin Thomas, Clewiston, Sisters-in-law; Saundra (Willis) Brooks, Orlando and Neomi (Ricky) Jones, Atlanta, a host of nieces, nephews, former students, coworkers, The Gallaudet University (Bison) Class of 1959, cherished longtime Friends/Sisters; Ida Gray Hampton and Mary Lynch Van Manen. Special children, Otto (Cassandra), Johnny (Lorraine), Kenneth (Annette), Mary, Ernest, Cheryl (James), Earline, and David.

Dorothy Mae Lapsley Smith was born to Crayton and Ethel Sanders Lapsley in Uniontown, Alabama. She was the fifth of nine children. While she was young, Crayton moved his family to Gary, West Virginia. After losing her hearing at the age of 14,... View Obituary & Service Information

The family of Dorothy Mae Smith created this Life Tributes page to make it easy to share your memories.

Send flowers to the Smith family.