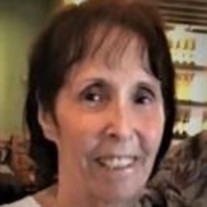 Dianna Lee Sands died in the early morning hours February 28th, 2021. She was 68 years old. Dianna was born to B.E. (Red) and Erma Branson March 30, 1952 in Key West, Florida, the oldest of five children. Her dad was a 25-year US Navy veteran, retiring as Lt. Commander. Dianna got used to moving a lot, which prepared her for her husband Paul’s career in broadcasting and the required travel from market to market. She had her own career, too, teaching second and third grades in San Diego, St. Louis, and substituting in Plattsburgh, New York. She was a terrific teacher…caring, imaginative, fully supportive of her students, and for almost all of them their “favoritist teacher ever.” After Paul’s retirement, they moved to the St. Augustine, FL area which was somewhat sunnier and warmer than the often-chilly reaches of upper New York. Paul and Dianna met at the University of Washington in June 1973 when she was volunteering to help in the KCMU (the UW student run and managed radio station). Paul often said that, the first time he saw her, he was like Al Pacino in “The Godfather” when he spotted Appolinia walking with a group of other young women in Sicily. “I was struck by the Thunderbolt”, he often told people. They married a year later, and at the time of her passing had been together for 47 years. She is survived by husband Paul; daughter Allison and her companion Jon Rose (St. Louis); son Bill and his wife Abby (Baldwinsville NY) and her Granddaughter Gaia, who is 16 and terrific. Di was a wonderful mother and the world’s best Nana. She is predeceased by her parents and her brother Butch Branson. She was a strong believer in the mission and work of St. Jude’s hospital, and any donations to that terrific facility would certainly be appreciated. You’re in the arms of God now honey. May He bless you and keep you. Dianna did not want a funeral or other ceremony and the family will honor her wishes. St. Johns Family Funeral Home is in charge of arrangements.

Dianna Lee Sands died in the early morning hours February 28th, 2021. She was 68 years old. Dianna was born to B.E. (Red) and Erma Branson March 30, 1952 in Key West, Florida, the oldest of five children. Her dad was a 25-year US Navy veteran,... View Obituary & Service Information

The family of Dianna Lee Sands created this Life Tributes page to make it easy to share your memories.

Send flowers to the Sands family.