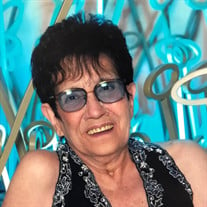 On January 25, 2021, Diana Rosen-Harris earned her angels’ wings and left her earthly home for her heavenly home. She was preceded in death by her mother, Ann; father, Robert; brother, Mickey and son, Adam. Her 81 years was very full of life, as a mom, sister, grandmother, best friends, prayer partner, mentor, accountant and bookkeeper. Diana is survived by her 2 half sisters, Francine Rosen and Myra Leonardi. She is al survived by her 2 grandchildren, Thomas A. Smith and Dani Leigh Terrell. Diana was the one to turn too when advice was needed. She was always willing to answer any questions and tell her honest opinion. Diana was a true friend who would never let you try and tie to yourself. Diana was full of Faith in the Lord and was an inspiration to everyone. She often prayed for anyone in need or if she felt you needed some encouragement. Diana was constantly seeking God’s guidance and many times her bookkeeping client conversations turned into prayers. Diana loved Christmas. In her younger years, she enjoyed making ornaments and every year her tree mightily displayed her elegant ornaments. She also enjoyed sushi and spending time with her friends, Peggy and Christy. Diane spent countless hours with her friends, Vonne and Christy. They enjoyed looking for angel figurines whether the angel was good, bad, ugly or beautiful. The three of them were like sisters, the three musketeers. Many years ago when Diana lived in New York City and she often enjoyed phone calls with her friend, Ira. They would talk way into the night even fell asleep talking from time to time. These long talks continued even after Diana moved to Florida in 1992. Diana loved all of her friends, Joey, Laurence, Leoni, Roz and Harold, Amy and Neary, along with so many others, too many to mention. Numerous good times were has by all. Diana, you are loved and truly missed. Graveside services will be 1:30p.m., Friday, January 29, 2021 at Craig Memorial Park with Father Ken Herzog officiating.

On January 25, 2021, Diana Rosen-Harris earned her angels&#8217; wings and left her earthly home for her heavenly home. She was preceded in death by her mother, Ann; father, Robert; brother, Mickey and son, Adam. Her 81 years was very full of... View Obituary & Service Information

The family of Diana Rosen-Harris created this Life Tributes page to make it easy to share your memories.

Send flowers to the Rosen-Harris family.