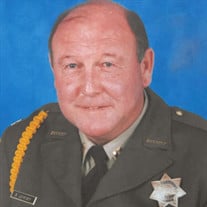 David Steven Levesey, 75, passed away August 7, 2021, in Ponte Vedra Beach, Florida. He was born July 6th, 1946, in Butte, Montana to Melvene and Joseph Levesey. The middle of three boys, his days were spent playing football, fishing, and exploring the surrounding mountains. He attended Whittier Elementary School in Butte, followed by Paris Gibson Jr. High and Great Falls High School in Great Falls, Montana. David loved his country and persuaded his parents to allow him to enlist in the Navy at the age of 17 during the time of the Vietnam War. He proudly served from 1964 until 1969 when he was discharged as an E6. After his discharge, David was hired by the San Joaquin County Sheriff’s Department in 1971 and began a rewarding career that spanned more than 30 years. During his time at the Sheriff’s Department, David worked as a Patrol Deputy, a Boating Safety Deputy, as a Background Investigator, a Custody Sergeant, Patrol Sergeant, a Detectives Sergeant in the Homicide Division, a Patrol Lieutenant, and as the Captain of Lathrop Police Services. While working, David realized the value of education in his career, so he advanced his education at Delta College, Saint Mary’s College, and Wharton’s School of Business. He taught classes in the Administration of Justice at Delta College and Franklin High School where he touched many students’ lives. After 34 years of service to the Sheriff’s Department, David chose to retire in 2005 to begin the next chapter of his life…one that included travel, golf, and the exciting role of being a grandfather. David loved the mountains, especially the Rocky Mountains and enjoyed camping with friends in his RV. There were many trips, including one to Alaska, and one cross country with friends for several months that included stops to Washington DC and New York. He enjoyed cruises and seemed to never tire of Alaska. He treasured these adventures. David loved being a grandpa and enjoyed spending his time with his grandkids, where the word “NO” was rarely uttered. David is survived by his loving wife, Cynthia Levesey; brother Joseph (Trudy) Levesey; daughter Renee (Steven) Pease; son David (Amanda) Levesey; stepdaughter Serina (Scott) Jones; stepson Casey Teicheira, and his four grandchildren: Lauren, Aidan, Penelope, and Aero. He was preceded in death by his parents Joseph and Melvene and his brother Melvin. He will be interred in Mountain View Cemetery in Butte, Montana on September 4, 2021. A Celebration of Life will be held in California on a future date that will be announced. In lieu of flowers, the family requests donations to one of David’s two favorite charities: The Wounded Warriors Project or St Jude’s Children’s Research Hospital. St Johns Family Funeral Home & Crematory is in charge of the arrangements.

The family of David S. Levesey created this Life Tributes page to make it easy to share your memories.

Send flowers to the Levesey family.