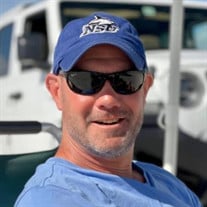 David H. (Dave) Fish, of St. Augustine, FL, died unexpectedly of natural causes on Thursday, May 14, 2021. He was 58 years old. David was born and grew up in Vermont, the son of Edward R. and Beryl (Sykes) Fish. He enlisted in the U.S. Navy in 1981. He completed Basic Underwater Demolition/SEAL training, considered to be some of the most difficult military training in the world. He was a graduate of BUD/S class 119, and was assigned to SEAL Team 4, where he deployed to Europe twice, and served during hostilities in Beirut, Lebanon. David finished his enlistment and became a Vermont State Police trooper, following his father’s footsteps. Two years later, David returned to the navy and served at SEAL Team 5, Naval Special Warfare Center, and SEAL Delivery Vehicle Team 1. He was promoted to the rank of Chief Petty Officer in 1992. David’s list of degrees shows the importance he placed on education: Bachelor of Public Administration 1992 Master of Arts, Human Resources Management 1993 Master of Public Administration 1996 Master of Arts, Management 1997 Master of Business Administration 2004 Doctor of Education 2007 After several years in the business world Dr. Fish began teaching at the post-secondary level. He became a professor of business at Florida State College, Jacksonville in 2012. David also returned to the Navy in 2012 as a reserve intelligence officer, attaining the rank of Lieutenant. During this time he deployed in support of navy operations at Naval Station Guantanamo Bay, Cuba. He spent his leisure time enjoying his Jeep and his Harley. David is survived by his mother, Beryl Fish, daughter Whitney Fish and son Edward Fish, II, and sister Alison Fish (husband Scott and family). David was predeceased by his father, Edward Fish. He also leaves behind a multitude of friends, colleagues and students who had the good fortune of knowing him. David cared deeply about his family and friends. We will miss you dearly, David. A military service will be conducted at Jacksonville National Cemetery on Monday, May 24th, 2021 at 2:00 pm (Please arrive 10-15 minutes early). A Celebration of Life will follow at a place to be determined. In lieu of flowers, please make donations in memory of David H. Fish, LT USNR, to the Navy Seal Foundation, https://www.navysealfoundation.org/

David H. (Dave) Fish, of St. Augustine, FL, died unexpectedly of natural causes on Thursday, May 14, 2021. He was 58 years old. David was born and grew up in Vermont, the son of Edward R. and Beryl (Sykes) Fish. He enlisted in the U.S. Navy... View Obituary & Service Information

The family of David Howard Fish created this Life Tributes page to make it easy to share your memories.